Destined to be together are Adhvik Mahajan and Neha… 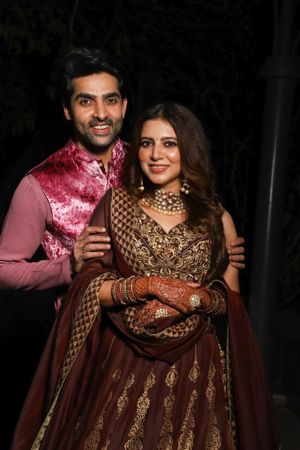 
A photograph in a newspaper ignited Neha’s interest in Adhvik Mahajan and by a stroke of luck they united in holy matrimony.

He was admired as Soham in the show Bani-Ishq Da Kalma and these days he is winning hearts as Jogi in Zee TV’s Teri Meri Ikk Jindri. TV and film actor Adhvik Mahajan met his lady luck Neha Adhvik Mahajan in college. This couple from Jalandhar is all about love.

Adhvik We met during our college days through some common friends and after a couple of years, the friendship gradually blossomed into love.

Neha When I was in school, I saw Adhvik’s picture in a newspaper when he had become Mr Jalandhar. So, a thought came across my mind that aisa ladka hona chahiye shaadi ke liye. I didn’t think God would be so kind that He would listen to me and make him my life partner. But the first time we actually met was at a fashion show in which we both were participating. That’s where we became friends and later on we fell in love.

Adhvik After being in a relationship for a couple of years, our families got to know about us and more than us, they wanted us to get married and then continue to concentrate on our respective careers!

Neha None of us officially proposed to each other. We knew our bond was very strong and that we can live together forever. Being from Jalandhar, parents usually want girls to get married post their studies, so, that’s when we thought about marriage and we had a long courtship.

Not so many changes

Adhvik I have become more responsible ever since. Neha and I have become thicker friends and all decisions of life, small or big, are taken by us, for us. It’s double the power and fun.

Neha Honestly, nothing much has changed after marriage and whatever change is there that is for good. Girls complain that they get stuck with responsibilities and don’t have the freedom, etc. I would say I am blessed that I have more freedom post marriage because Adhvik is very progressive in his thoughts.

Adhvik It’s beautiful but it feels like it was meant to be. That happens when you find your true soul mate. Each day, we learn and grow together.

Neha Living together is fun. I think there is literally nothing that we don’t do together. It’s never ‘I ‘ in our relationship, it’s always ‘we’. So, if one has such companionship, what more to ask!

Adhvik & Neha: We like spending time with each other be it watching movies, dinners, going on vacations, basically whatever we do, we do it together and love it.

Adhvik Nothing as such. I love her the way she is. But yeah, if she can switch off the air conditioner sometimes, it will be a relief (laughs).

Neha Although there is nothing that I would literally want to change in him but I feel Adhvik should get more relaxed and overthink less. He always want to do one thing or the other or keeps on thinking about what needs to be done next.

Adhvik Neha does not take fitness too seriously.

Neha He keeps on asking me to switch off the AC.

Adhvik and Neha Our couple goals are to be super successful in our respective professions. Neha wishes for me to win the national award for acting, which is my ultimate dream too. Similarly, even I wish for the entire world to recognize Neha’s styling and makeup talent and that she is the best in whatever she does. We are very passionate about achieving these goals.

Adhvik The most attractive thing about Neha is her innocence that has been the same ever since college and her helpful nature. She is literally ready to help everyone and anyone.

Neha His humble attitude and the immense respect he has towards his elders.

A marriage works when

Adhvik and Neha Every couple is unique and so is their bond. In our case, being honest about everything and trust keeps it together.

Secret to happily ever after

Adhvik Just be true friends with your partner.

Neha The secret is to be yourself, no matter what. We tend to lose ourselves in order to keep the other person happy but in the long run, it backfires.

Adhvik and Neha Space is important to refill your energies and have some ‘me’ time. If you cannot pamper/love yourself, then how will you love others or your partner in this case.