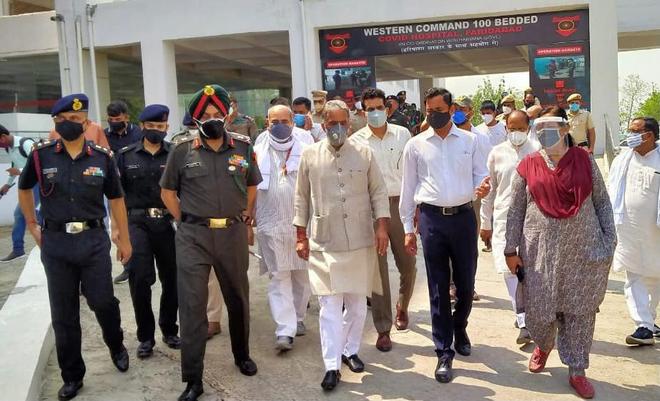 A 100-bed Covid hospital became functional at Chhainsa village in the district on Tuesday morning after its formal inauguration.

The announcement to start this hospital had been made by the Haryana CM on April 26. The hospital will be able to admit Covid patients requiring oxygen support.

The hospital building, located about 20 km from the district headquarters, had been lying idle since 2015 when it was closed down by its management (private) due to financial crisis.

While it was taken over by the state government last year, the authorities decided to use it as Covid treatment facility last month. However, the hospital will be run by doctors and staff of the Western Command of the Indian Army.

Stating that the move was a part of ‘Operation Namaste’, Lt Gen Manjinder Singh, COS, Western Command, said that a team of Indian Army doctors and paramedics would handle the treatment of patients here. Local MP and Union Minister of State for Social Justice and Empowerment, who was chief guest at the inauguration, thanked the Indian Army and expressed his gratitude for providing services in this crisis.

Revealing that admission of patients here would be done after reference by Civil Hospital Faridabad, DC Yashpal Yadav said that all help and logistic support would be provided to the Army team for smooth operation. He said while 30 ventilator beds have been provided, around 700 gas cylinders have been made available. The Army has deputed a team consisting of 10 doctors and support staff consisting of nursing attendants and other employees.

This hospital will also be able to refer critical patients to the ESIC hospital, it is claimed. — TNS

Designer Gurmeen Shrivastav believes in adjusting with the times