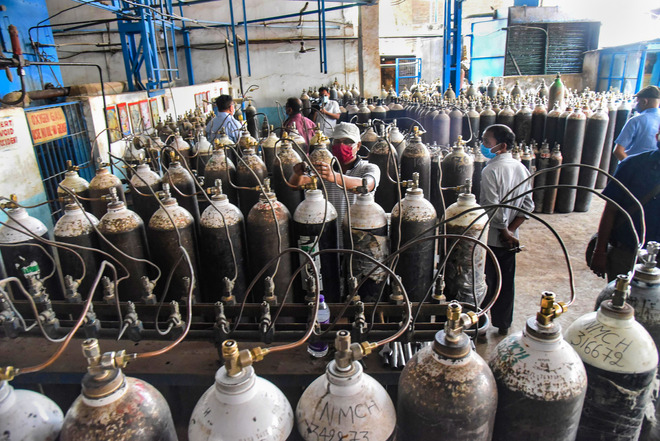 Congress MLA, from NIT, Faridabad Neeraj Sharma on Thursday has demanded an All-party probe into the alleged siphoning off Haryana’s share of Medical Oxygen to Delhi by a Palwal-based private firm.

He has also written a letter to Chief Minister ML Khattar, in the matter highlighting, the fly-by-night operation of the firm.

He alleged that the firm has the patronage of administrative machinery, and political bigwigs in the state.

The firm is the single Filler agency for both Haryana and Delhi. Hence, the gas would come from Panipat Plant, producing the gas.

It was responsible for the onward supply of the gas to the two states as per their prescribed share.

In a statement, Sharma alleged that on May 3 the gas had officially reached the firm premises from Panipat to be supplied to Haryana and Delhi. However, the share of Haryana was not supplied to it.

Tankers marked exclusively for Haryana and Delhi were set off from the Panipat plant to the firm on May 3 after there was suspicion that the quantity of gas was filled erratically and supplied to Haryana, and thus depriving it of its share for the past about one month.

Earlier, the gas would come to the firm in common containers which would be subsequently segregated for onward supply to the states.

Sharma alleged that management representatives of hospitals in Faridabad had staged demonstrations against an erratic and short supply of Medical Oxygen on April 23.

“A Committee representing all political parties in Haryana must probe into the alleged irregularities which accounted for untold hardships of Covid patients in Haryana, especially in Gurgaon and Faridabad,” said Sharma.

Sharma said that the firm cheated Haryana which in any case was officially getting a lesser quantity of gas compared to Delhi.

In this context, he said that Haryana Chief had recently apprised the Union Cabinet Secretary on the short supply, and urged for enhancement of the share.

Sharam said the patients and their kins in Haryana would take up the case of cheating against the State to its logical conclusion.