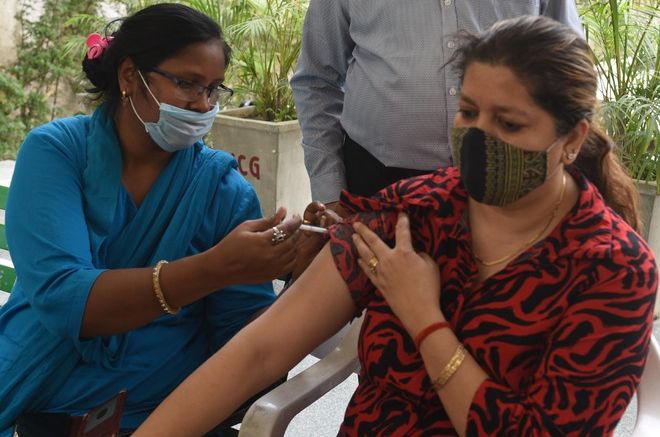 
Chandigarh: The Health Department administered 84,950 vaccine doses to beneficiaries on the second of the “mega vaccination day” of the week on Tuesday. Additional Chief Secretary (Health) Rajeev Arora said that so far, 20,97,282 people had received the jab. Meanwhile, 2,099 cases of Covid were reported and nine persons died of the virus. TNS

‘Explore possibilities of setting up warehouses’

Karnal: Minister of State for Women and Child Welfare Kamlesh Dhanda today faced protest by farmers during a programme at Kakot village in Kaithal district. Some of them entered the venue and raised slogans against her. Kaithal SP Lokender Singh said no case had been registered. TNS

Sonepat: The Mitti Satyagrah Yatra carrying the soil from 23 states concluded at the Singhu border on Tuesday. The soil was placed at a martyrs’ column designed by a team of artists led by Kulpreet Singh. Earlier, the yatra led by social activist Medha Patekar was received by Samyukt Kisan Morcha leaders. TNS

Sonepat: To mark the death anniversary of former PM Ch Devi Lal, the INLD has set up a 40-bed hospital at the Singhu border. It was inaugurated on Tuesday by family members of farmers who died during the agitation. “Specialist doctors, nurses and other paramedical staff will be available at the hospital,” INLD leader Abhay Singh Chautala told the media. TNS