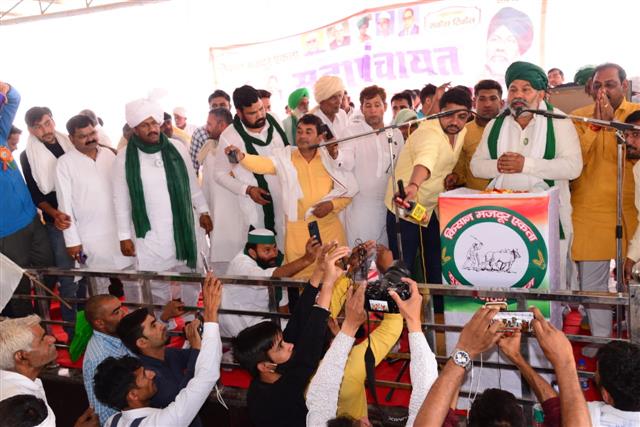 BKU leader Rakesh Tikait has warned the Haryana Government against harassing the people who supported the farmers’ agitation saying that the functionaries of the government agencies sent to raid the premises of farmers or their supporters would be held hostage.

Addressing a ‘kisan mahapanchayat’ at Meham town in Rohtak district today, Tikait reiterated that the ongoing agitation of the farmers would continue until their demands of repealing the recently enacted agriculture laws and enactment of a law to ensure the provision of MSP were fulfilled.

Regarding the Recovery of Damage to Property Bill passed by the Haryana Vidhan Sabha recently, Tikait stated that first of all, recovery should be made from Haryana Chief Minister Manohar Lal Khattar, who got the state’s roads dug up and damaged during the farmers’ agitation.

He dared the Haryana Chief Minister to get down from his helicopter at any place in the state.

“In any case, the government has already sold the Red Fort and the sale of 26 government enterprises, including airports and railway stations, is in process,” he remarked, adding that the government had plans to set up industrial units on agricultural land in the next 20 years and the farmers would be forced to work as labourers there.

‘It is crucial to observe things’