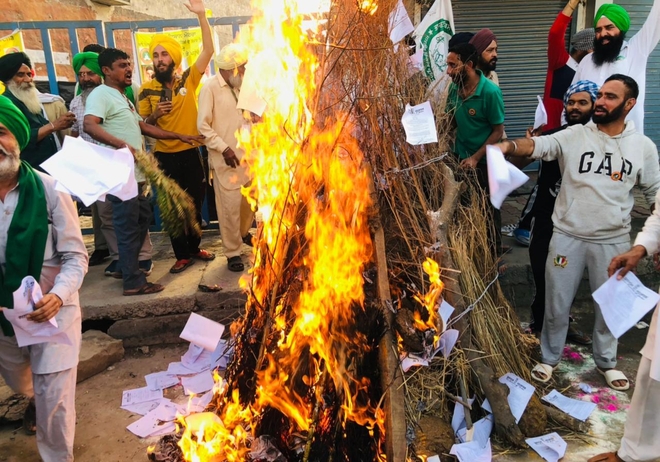 Farmers, who have been protesting at Delhi borders for the past four months, today burnt copies of the farm laws as part of the “Holika Dahan” celebrations at the Singhu border, the Peont toll plaza on the NH-709A in Karnal district and at a dharna site near Palwal’s Antoha village.

They termed the laws “anti-farmer” and “anti-people”, and said they would not step back until the Centre repealed the three laws.

Meanwhile, the Samyukt Kisan Morcha condemned the Haryana Government for passing the “protesters to pay” law.

Dr Darshan Pal, a member of the Samyukt Kisan Morcha, said: “The Haryana Recovery of Damages to Property during Disturbance to Public Order Act, 2021, contains such dangerous provisions that will undermine democracy. By bringing in this law, the state government wants to derail the farmers’ movement.”

Under the Act, the loss of private or public property during protests would be recovered from agitators.

The Samyukt Kisan Morcha, meanwhile, decided to observe April 5 as the “FCI Bachao Diwas”. In view of the privatisation of the Food Corporation of India (FCI), its offices across the country will be gheraoed from 11 am to 5 pm.

At the Peont toll plaza, the farmers remembered those who died during the protest. Sukhwinder Singh, a farmer leader from Assandh, said: “More than 300 farmers have lost their lives ever since the agitation started. We cannot celebrate any festival as our brothers and elderly persons have sacrificed their lives during the agitation.”

“To keep the momentum, duties have been assigned to farmers as per villages. One vehicle is on duty to pick and drop farmers from two villages daily, so that the numbers do not dwindle,” he added.

Meanwhile, another farmer leader Chander Pal said, “We have burnt copies of the laws in protest against Central Government’s ‘rigid attitude’ towards our demands.”

At the dharna site in Palwal district, protesters said burning the copies of the laws was like burning demons unleashed by the Central Government.

Former minister Karan Singh Dalal condemned the police for booking farmers for blocking a national highway. He demanded a fair probe into the matter.

The Congress leader alleged the Centre was leaving no stone unturned to crush the agitation. “The BJP will face defeat in the in the Assembly elections in five states,” he claimed.

Thousands of farmers are protesting against the three laws passed by the Centre at the Singhu, Tikri and Ghazipur border for the past 122 days. Theyare demanding repeal of the laws and legal guarantee on the MSP.

The talks with the Union Government have not been held for the past two months after the 12th round of the talks on January 24.