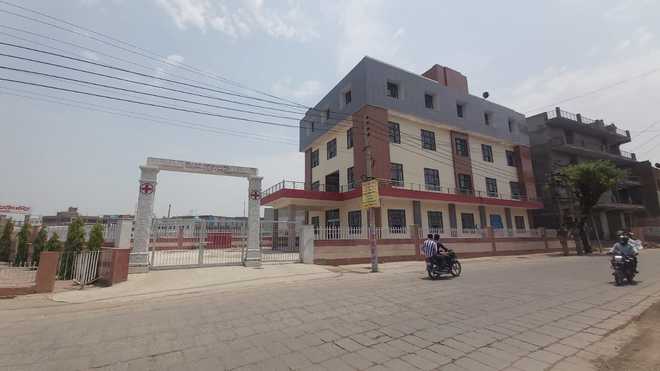 A four-storeyed building, built at a cost of Rs 1.25 crore in Chandawali village in the district and inaugurated four months ago, has been lying unused despite the fact that the authorities are trying to put all resources together to enhance the hospitalisation and treatment facilities for the Covid patients.

Could’ve been used for covid patients

The building was built with the funds provided by the village panchayat, but the failure of the authorities concerned to use it to date amounts to the wastage of money and resources. The building could serve the purpose of treating patients when the Covid surge is at its peak.

“Though the officials concerned had proposed to use it suitably for locals and residents of the region, the 32-room building is lying idle,’’ said Jaswant Singh, a local.

“It was built with the funds provided by the village panchayat, but the failure of the authorities concerned to use it till date amounts to wastage of money and resources,” said Singh, adding that the building could serve the purpose of treating the patients, when the surge of Covid-19 had been at its peak.

Questioning the delay, Anju Yadav a former sarpanch of the village, said the building, inaugurated by the local MP on January 17, it was meant to replace the old and dilapidated building to provide medical facilities under the extension programme of the AIIMS hospital. She said it was amazing that no one from either AIIMS or the Health Department had approached to use it for medicare facilities.

She claimed that the present scenario was the fallout of the merger of the village panchayat with the Municipal Corporation Faridabad (MCF) in January this year, as any development work in the village would be carried out by the MCF, after the village body stood dissolved.

Chandawali had been among the richest village panchayat with funds to the tune of Rs 60 crore in its account at the time it was merged with the MCF, it was revealed.

Dr Harshal Salve, AIIMS extension, Ballabgarh, said while the sub-centre at Chandawali was already functional, the proposal for handing over the new building was yet to be received.

Dr Randeep Singh Poonia, Civil Surgeon, said the issue had no connection with the Health Department.