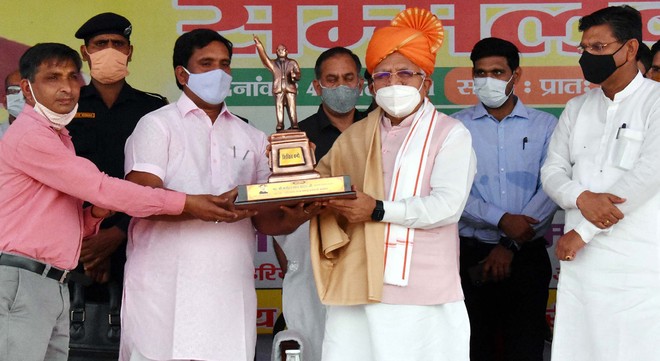 Chief Minister Manohar Lal Khattar today announced, among a slew of incentives, an increase in the salary of safai karamcharis (sanitation workers) and sewer men.

“The monthly salary of sanitation workers of rural areas has been increased from Rs 12,500 to Rs 14,000, and of those working in urban areas from Rs 15,000 to Rs 16,000. Sewer men will get Rs 12,000 every month instead of Rs 10,000,” said the Chief Minister while addressing safai karamcharis in a state-level Safai Mitra Uthan Sammelan here.

Khattar assured safai karamcharis of disbursing the salary on time. “In case of delay for any reason, the salary will be given from Rs 1 crore fund allotted to each DC. An additional benefit of Rs 500 will be given if the salary is delayed.”

Among other incentives, safai karamcharis having an annual income of Rs 1.8 lakh will get a bank loan without guarantee for the education of their children.

On their guard after farmers protested CM Manohar Lal Khattar’s visit to Rohtak on Saturday, the district administration turned the city into a fortress. Around 1,500 police personnel led by 11 DSPs were deployed. All roads leading to Kalidas Rangsala and PWD Rest House were sealed with barricades. As a result, commuters faced inconvenience.

I have written a letter to Anwali villagers, urging them to maintain social harmony. Some people driven by vested interests are doing politics. They should refrain from doing so, otherwise they will have to bear the consequences. — Manohar Lal Khattar, Chief Minister

Ngurah Rai International Airport To Close For 24 Hours For Nyepi

76.16 per cent turnout in fourth phase of elections in West Bengal