Padyatra gets good response in Rohtak 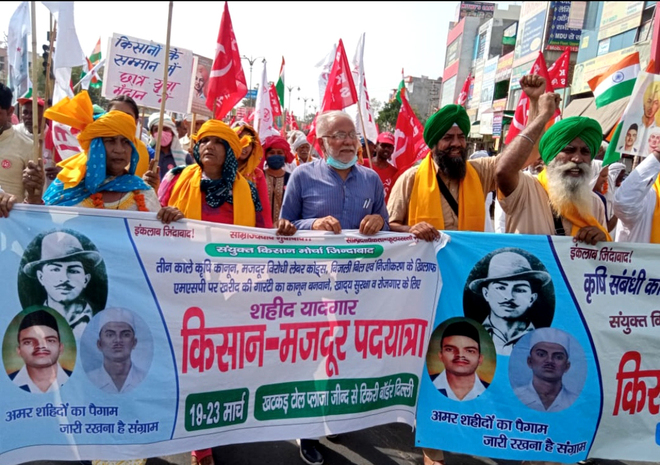 Locals, including students, social activists and women, joined the Kisan Mazdoor padyatra when it reached Rohtak town from Hansi (Hisar) on Sunday.

They accorded a warm welcome to farmers and expressed solidarity with them, claiming that it is notonly their fight but of all sections of the society.

A citizen solidarity committee also organised a reception at the Double Park in the Model Town locality to felicitate seven protesters who were booked in connection with the Republic Day parade in Delhi on January 26 and were out on bail. The committee also honoured women protesters with siropa, who were part of the padyatra from the beginning.

“Flowers were showered by people when the farmers on padyatra reached Rohtak from Bahu Akbarpur village where they stayed on Saturday night. Even, people garlanded the marchers at various places and raised slogans against the BJP government as a gesture to support the ongoing farmers’ agitation,” said Inderjit Singh, vice-president, Akhil Bharatiya Kisan Sabha.

“Those on padyatra will reach the Tikri border on Monday and will participate in the Martyrs’ Day function to be marked by the Samyukt Kisan Morcha on March 23,” he said.

Three cops suspended, another shifted day after scuffle between BJP-RSS workers and policemen in UP