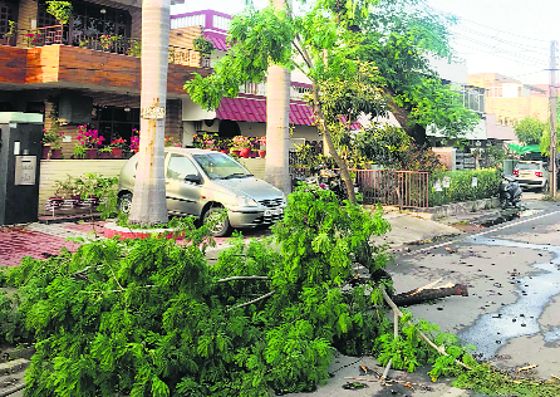 
A policy should be in place to remove aged and diseased trees. The storm on the intervening night of April, 6 and 7 has left behind a trail of destruction, as aged and diseased trees have damaged numerous vehicles and house elevations. The same has also been reported to the MC/HSVP vide letter August 27, 2020 to no avail, in fact, nobody is bothered to listen, despite many reminders and calls. I hope the authorities will take note of it . Ramit Ritu Bagga, panchkula

Ban on entry of vehicles a welcome step in karnal

Nishant Kumar Yadav, Deputy Commissioner, Karnal, has taken a good decision to ban the entry of vehicles in the main markets of the city such as Karna Gate, Sarafa Bazar, Gur Mandi etc in public interest. Shopkeepers of these markets should not be allowed to sub-let the space in front of their shops to any street vendor. The roads of these markets can be opened and widened from Ghantaghar Chowk towards Karna Gate, Kalandari Gate, Arjun Gate, Subhash Gate and upto Meera Ghati Chowk by making dividers on the main Old GT Road, thereby keeping the traffic arrangements intact. The administration should also make proper arrangements for parking of the vehicles coming to the markets. —Shakti Singh, Karnal

Encroachment removal a job half done in Panchkula

Notwithstanding the recent well-intended moves of the Haryana Assembly Speaker and Panchkula MLA Gian Chand Gupta to rein in the widespread encroachment at various public places across the city, some violators still continue to thrive in some of the market areas here. The visit by MC’s top ranking officials to Sector 8 booths and 9 market areas will reveal the real inside story. How come the civic body has failed to clear the forced occupancy of varandahs (meant for the free movement of general public) by some Sector 9-based shopkeepers such as fruit vendors, fast-food sellers and even a few general stores? Will the newly elected Municipal Councillors rise to the occasion and remove all existing encroachments in Panchkula? —SK Gupta, Panchkula

WHAT OUR READERS SAY

Is a civic issue bothering you? Are you agitated over the lack of concern? Is there something heartening that you feel needs to be highlighted? Or a picture which in your opinion ought to be seen by many, and not just you?

invites its readers to have their say. Please email at: [email protected]

BJP govt will complete term and return to power with absolute majority in Karnataka: Amit Shah