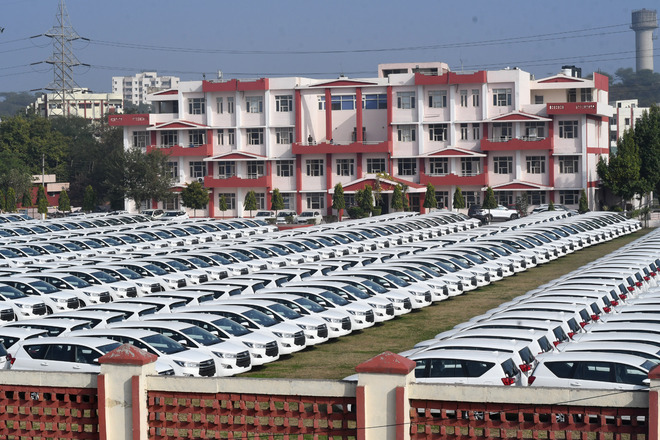 It has been nearly four months that 630 seven-seater SUVs that the Haryana Government had bought for the ambitious Dial 112 project have been gathering dust at the Police Lines in Panchkula.

Though the trial run for the Centralised Emergency Response and Support System (CSERC) was conducted in Gurugram and Panchkula in February, the Dial 112 project which integrates helpline for fire, ambulance and police services will be launched by April-end. These emergency response vehicles purchased at a cost of Rs 94 crore will be despatched to police stations by mid-April.“The project is on track. A few issues need to be fixed. The SUVs will undergo a complete makeover to cater to the emergency calls. In all, 22 modifications have been identified. These days, gadgets and machines are being installed in the SUVs. This will be done in a fortnight and later the SUVs will be sent to districts whenever the state government gives the nod,” said Additional Director General of Police (ADGP) Arshinder Chawla, who heads the Dial 112 project.

Each SUV will have a multi-display terminal which will receive messages concerning where to report and a voice pack of the victim’s call received on the helpline. “By the time the vehicle and the police team reach the spot, they will know what is expected of them,” said Chawla.

It has been decided that all vehicles under the Dial 112 project will be allocated a particular series of HR-99, and embossed with a logo and a flash bar so that these are identified from a distance. “On an average, two vehicles will be allocated to every police station after having tested all hardware and software modules and having imparted training to personnel,” the ADGP added.

Manesar cops provide food to those waiting for Oxygen refills