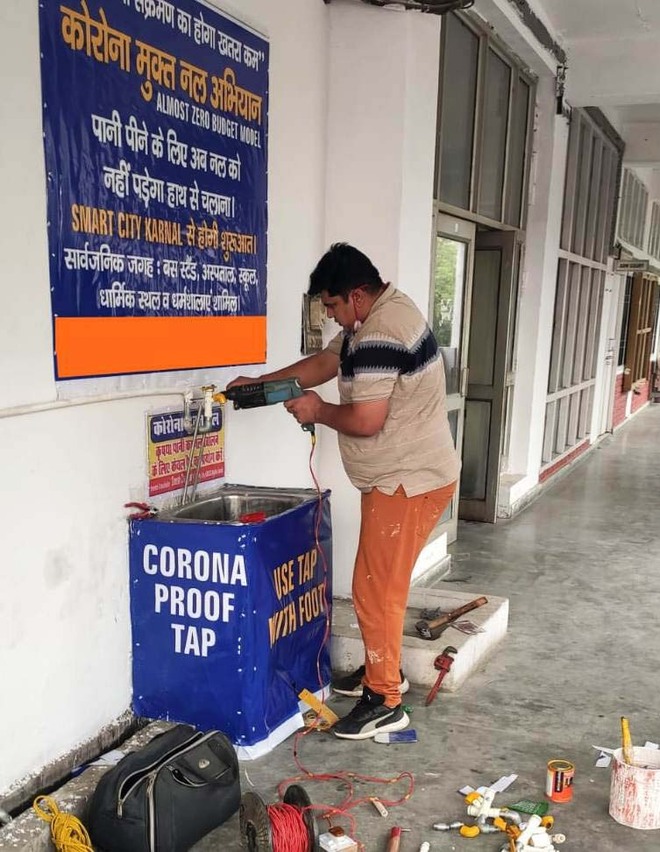 Amid rise in number of Covid cases when people avoid touching taps at public places to drink water, a teacher of Government Senior Secondary School, Nigdhu, has come up with a novel initiative of hand-free taps, which can be operated with foot.

Dinesh Chaudhary, a PGT (physical education), has kept the target of replacing 100 conventional taps at public places with the foot-operated ones. As of now, he has replaced one or two taps at Trauma Centre, Kalpana Chawla Government Medical College (KCGMC), old bus stand, new bus stand, Mini-Secretariat and a gurdwara in Chandigarh.

“Due to the scare of getting infected with coronavirus, people prefer to remain thirsty as they do not want to touch taps, so I thought of replacing these taps with foot-operated ones. I assemble these taps myself. I start replacing conventional tap with the permission of the authorities concerned,” said Chaudhary.

Nishant Kumar Yadav, Deputy Commissioner, appreciated his step and said the‘use-tap-with-foot’ model might help in reducing the spread of coronavirus. Almost a zero budget solution, this model will eliminate the need to touch a tap with hands.

Union Minister Dr Jitendra Singh says, India’s Space Power will be showcased in all its dimension in the upcoming World Expo at Dubai in October this Year