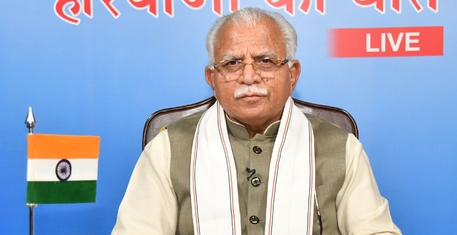 Haryana Chief Minister Manohar Lal Khattar on Thursday urged farmers to suspend their stir against farm laws amid the grim Covid-19 situation, claiming that their movements to and from dharna sites were spreading the infection in villages.

Khattar said farmers may resume their agitation later if they wish, but they must stop it as of now.

“If they wish to restart these dharnas once the situation is under control, they are free to do so,” Khattar told a news conference digitally.

He said he had appealed to farmers’ leaders even a month earlier to suspend their dharnas so that the disease does not spread.

Referring to farmers’ movement to and from dharna sites, Khattar said, “What is coming to the fore now is that because of these dharnas, this (infection) has spread.” “In many villages, hotspots have emerged because their people are regularly coming and going back from dharna sites,” the chief minister added.

Farmers have not only been sitting in protest near the Singhu and Tikri borders but in many other parts of Haryana too.

“Their leaders should understand the situation even now. They keep ranting that they will take the vaccine but will not get themselves tested. If they do not get tested, one doesn’t know who might have been impacted by COVID,” said Khattar.

“They should come forward to be tested so that those found positive can be treated and other necessary measures can be taken accordingly,” he added.

Referring to protesting farmers’ reluctance to be tested for the infection, the chief minister said “everyone should have faith in the health and medical system. If we start doubting it, it displays our narrow mindedness. So, I appeal to farmers sitting on dharnas to get their tests done”.

Amid a surge in Covid-19 cases, Khattar had earlier nearly a month ago too had urged farmers to withdraw their stir on “humanitarian grounds”.

He had then said while it is the constitutional right of every person to protest and the state does not have a problem with anyone doing so in a peaceful manner, the situation due to rising COVID cases is a matter of concern.

Days after the CM’s appeal last month, Haryana BKU leader Gurnam Singh Chaduni had then said protesting farmers should not be compelled to get themselves tested or vaccinated and if health workers tried to force them, they will not allow them to enter protest sites.

Khattar, meanwhile, was also asked to comment on the allegations that a woman from West Bengal, who died after showing COVID-like symptoms, at a hospital in Bahadurgarh, had been raped by two men she had accompanied to a farmers’ protest site at the Tikri border.

“Police are conducting investigations. Whosoever is found guilty in investigations, strict action will be taken against them as per law,” said Khattar.

Haryana Police had on Sunday formed a special investigation team to probe the allegations after the 25-year-old woman’s father lodged a police complaint.

Six people, including two prime accused, have been named in an FIR lodged on a complaint by the father of the deceased woman on Saturday. PTI