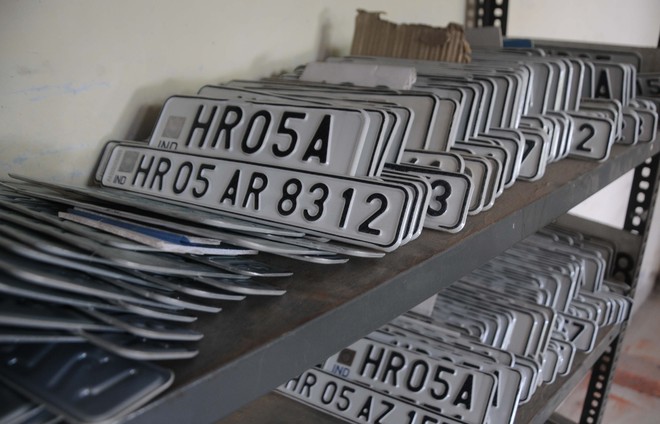 Vehicles can be seen in Karnal and Kaithal districts plying without the mandatory high-security registration plates (HSRPs). According to information, 4,803 HSRPs are gathering dust in the registration offices of Kaithal. Similarly, 1,977 HSRPs are lying at Karnal offices.

In Kaithal, as many as 17,500 vehicle owners had applied for the new number plate, but only 12,697 turned up to get these affixed.

As many as 14,282 applications were received in Karnal, but 12,305 HSRPs had been affixed so far. The district authorities have started the online delivery facility, but not many have shown interest in it.

We are serving notices on defaulters and action will be taken against them. —Sujan Singh, DC, Kaithal

The HSRP is mandatory to check crime. I will take stock of the situation in a couple of days. —Nishant Kumar Yadav, DC, Karnal

For new vehicles, the HSRP is being affixed at the time of purchase, but for the old ones, the owners are supposed to contact the SDM or RTA offices.

As per the orders of the Supreme Court and the provisions of the Motor Vehicles Act-1988, the HSRP and colour-coded stickers are mandatory for both new and old vehicles, failing which the owner will be penalised.

On the directions of the Union Ministry of Road Transport and Highways, the Karnal administration had started the process of affixing HSRPs in 2012. However, neither vehicle owners nor the administration took it seriously. Kaithal Deputy Commissioner Sujan Singh said that they were serving notices on the defaulters and action would be taken against them.

Karnal Deputy Commissioner Nishant Kumar Yadav said that the HSRP was mandatory to check crime. “I will take stock of the situation in a couple of days,” he added.