6 FIRs lodged for violation of norms at marriages in Una 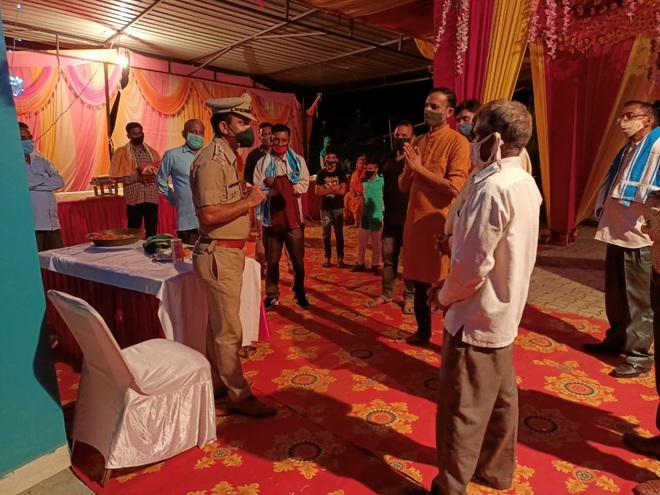 While the number of Covid cases in Una district is swelling each day and the district administration is making efforts to check the spread of the virus, the recent marriages too played a part in contributing towards the spread of the pandemic.

The police and the district administration initiated penal action against six persons who blatantly flouted Covid restrictions and provisions of the Disaster Management Act by organizing public gatherings and feasts during marriages of their sons and daughters.

Additional Superintendent of Police Vinod Dhiman said six FIRs have been registered at Una Sadar police station under Section 118 IPC and Section 51 of the Disaster Management Act against the parents of the bride or groom where the public gatherings had been witnessed.

The ASP said cases had been registered against persons belonging to Kotla Khurd, Mehatpur, Santoshgarh and Sanoli villages of the district. He informed that investigations had been initiated and action as per the law would be taken so as to deter other people from organizing such gatherings during the pandemic period.

It is learnt that after marriage ceremony at Kotla Khurd village, new Covid positive cases had emerged from among those who attended the marriage.

Dhiman said in some cases the persons concerned had not even taken permission for organizing the event, but had invited guests more than the permitted number.

A criminal case under Section 118 IPC and Section 51 of Disaster Management Act has also been registered against the management of a liquor vend located near the railway flyover on the Una- Chandigarh road in Una city. The salesman was selling liquor despite a ban imposed during the corona curfew, he said.

The cyclonic circulation over north Chhattisgarh & neighbourhood, extends up to 1.5 km above mean sea level persists

Was in mental agony after Tokyo snub: Chinki