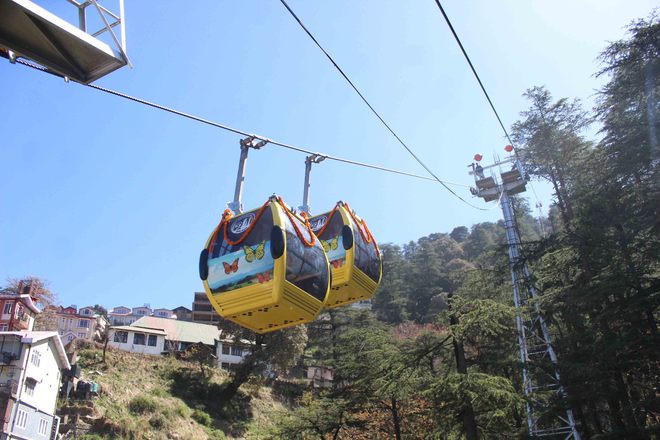 The way Shimla residents travel within the city and to the peripheral areas could change for good in not too distant future. The Ropeway and Rapid Transport System Development Corporation (RRTSDC) will open technical bids for its ambitious passenger ropeway system for the city on April 6. “If our promoters are able to travel this time to India, the project will start moving,” said an RRTSDC official.

The RRTSDC had floated the request for proposal last May, inviting companies/ consortiums to design, construct, operate and maintain a passenger ropeway system for the city struggling with increasing traffic on its narrow roads and almost non-existent parking spaces. “A few international companies expressed interest in the project, but their representative could not travel to India because of the Covid outbreak. Hopefully, they will be here this time for technical bids,” the official said, adding that the Rs 1,200-crore project would be executed in PPP/VGF mode.

“Shimla will be the first city in the country to use cable cars on ropeways for urban transportation. It will be a sort of pilot project for other cities that need an alternative transport system. If it succeeds here, it could be replicated in other cities as well,” he said. “And since it will be a transport facility, the fares will be more or less similar to bus fares.”

The ambitious plan has three phases, with the initial stage catering to the core Shimla area. In the next two phases, the RRTSDC has plans to bring in distant places like Kufri, Mashobra and Chail into the ropeway network. “In the first phase, 22.1-km-long ropeway will be laid, having 26 stations from where people can board and disembark the cable car,” the official said.

He said the land for the project had been identified and the required surveys, including an aerial survey by a Czech company through drones, had been completed.

“It will be akin to Metro on ropes. Hopefully, it will not get stuck in files and permissions. The city needs it desperately,” said a city resident.