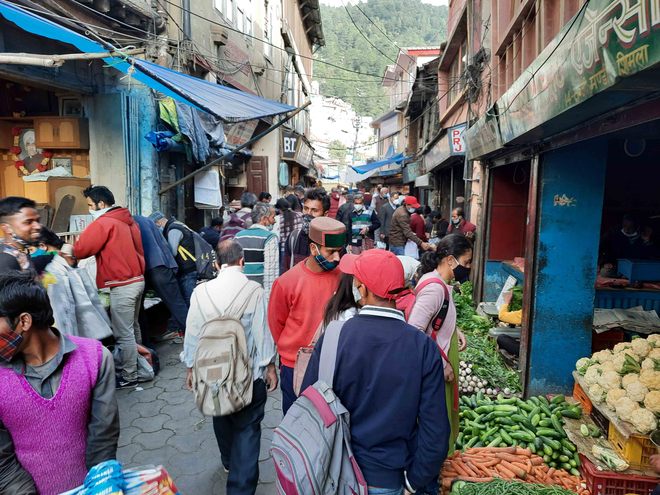 The two-decade-old dream of shifting the vegetable, timber and grain markets from the heart of the town to decongest the state capital still remains a distant dream as forest clearances are yet to be obtained on the land transferred by the Municipal Corporation to the user agencies.

Sites identified, clearances yet to be obtained

Even though there have been plans of shifting these services from the main town to the suburbs or on the Shimla-Dhalli bypass for over 20 years now, it could take some time before the actual shifting takes place. The movement of heavy vehicles ferrying vegetables, grain and timber slows the traffic flow of the town, which has been witnessing massive traffic jams, especially during the peak tourist season.

Though a site had been identified at Darni Ka Bagicha on the bypass to shift the Sabzi Mandi, it was only a month ago that the land had been transferred to the Agricultural Produce Marketing Committee (APMC). “We have given the NOC to APMC for using 25 bighas for setting up the Sabzi Mandi but as some forest land is involved, permission will have to be sought from the Union Ministry of Environment and Forest,” said Ashish Kohli, Commissioner, Shimla MC.

A vast expanse of 250 bighas had been identified near Shanan village near the Satluj Jal Vidyut Nigam Office on the bypass to shift the timber market and the grain market. Here too, the NOC for the use of land has been issued to the APMC. However, with some portion of the land being owned by the local panchayat, efforts will have to be made to remove the hurdles.

There has been talk of shifting of the vegetable and grains markets from the congested Lower Bazaar and Ganj areas, respectively, for so many years. However, not much effort has been made to make it a reality. These initiatives were prominently highlighted in the Draft Development Plan of the town as well as in the City Mobility Plan as the presence of large number of vehicles near Sabzi Mandi and on the way to the grain market at Ganj results in a huge traffic jam on the Circular Road.

The presence of the timber market, located next to the Lakkar Bazaar Bus Stand, is one of the biggest traffic bottleneck. Traffic jams are the worst on this road, which is also a route for the Indira Gandhi Medical College. As such, there is an urgent need to shift the timber market from this point.

The only ray of hope is that Urban Development Minister Suresh Bhardwaj, who also happens to be the local MLA, is very keen to expedite these projects and give them priority.