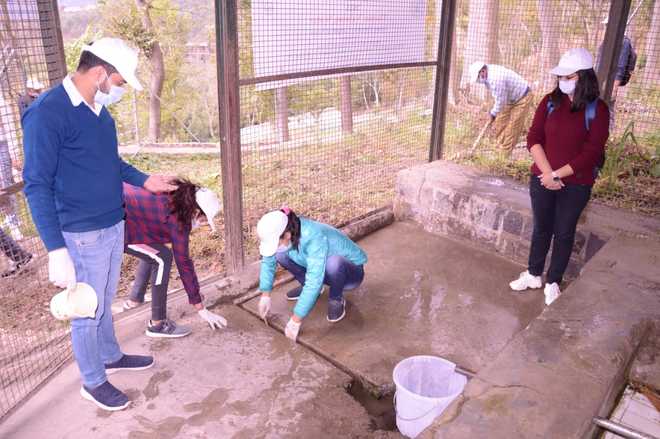 
The World Water Day was celebrated at Dr YS Parmar University of Horticulture and Forestry, Nauni, by the Department of Environmental Science in association with HIMCOSTE. The students and staff undertook a cleanliness drive with a special focus on cleaning the natural bodies on the campus. Abhishek Taneja from the Just Earth Organisation, Solan, spoke on the occasion. Dr Ajay Kumar Singh, Public Health Specialist and Medical Officer, District TB Centre, Solan, spoke on water sanitation and hygiene. Dr. Parvinder Kaushal, Vice-Chancellor, was the chief guest during the final session held in the evening. Dr SK Bhardwaj, Professor and Head, Department of Environmental Science, elaborated on the activities carried out by the department under the Swachhta Action Plan on the occasion.

A delegation of the Himachal Government Teachers Union met Higher Education Director Amarjeet Sharma. The delegation, led by union’s president Virender Chauhan, submitted a memorandum to the Director and said if their issues like promotions were not solved by March 31, the union will have no option but to protest at the Directorate in the first week of April. The union also registered its protest against the notification that requires lecturers and principals to mark attendance twice a day.

The DAV, Manali, organised a ‘Pratibha Samman Samaroh-cum-Shaam-e-Ghazal’ at Hotel Moniker to honour meritorious students of board classes X and XII. The occasion was graced by Ravinder Talwar, secretary of DAV CMC, New Delhi, as the chief guest. The ghazal programme was presented by teachers. Some items were presented by parents as well as students. The students were honoured along with some teachers for outstanding result in board classes.

The general house of the Parent Teacher Association (PTA) was held in La Montessori School (LMS), Kalheli, 11 km from Kullu. A new working body was elected, in which previous PTA president Vishal Sharma was unanimously chosen to continue for this term as well. School principal Vandana Prashar conducted the elections.