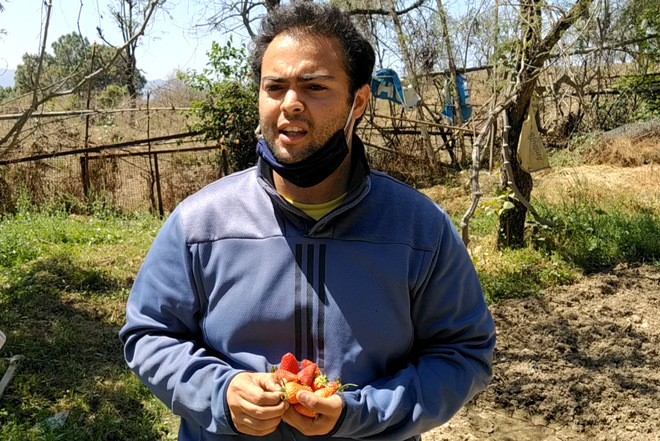 While people were cursing Covid for loss of jobs, a youth from the town successfully grew strawberries and made money. Prakrit Lakhanpal, a young entrepreneur, wanted to do something fruitful at a time when people were struggling to save their jobs. He started growing strawberries in his small field at Vikas Nagar as a pilot project and it turned out to be a big success.

Prakrit said since he had nothing to do during the pandemic, he tried to experiment in farming. He said first, he tried his hand at floriculture and then, on growing strawberries. He said he ordered 1,000 plants of strawberries from Banglore that were flown to Chandigarh and then by road to Hamirpur. He said the survival rate of the plants was 90 per cent and now after about a month, harvesting had been started. He said he was getting around 4-5 kg of strawberries every day. He said since it was a pilot project and was successful, he would increase the cultivation area next time.

He said strawberries were sold at Rs 100 per kg to retailer who in sold them at Rs 230-250 per kg. He said the produce was purely organic and the quality was also exceptionally good. He said he had sold over 100 kg of strawberries so far.

Horticulture expert Mona said some areas of the district had good climatic conditions for the cultivation of strawberry. If cultivated scientifically, it can boost the farmers’ income, she added.