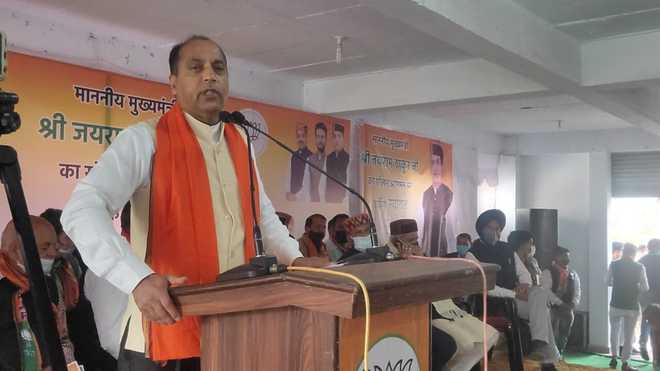 Chief Minister Jai Ram Thakur on Sunday urged residents of Solan to ensure the victory of BJP candidates by an overwhelming majority in the Municipal Corporation poll.

More than 150 retired officers, employees and women of various wards, along with Congress district secretary Jatin Soni, joined the BJP. As many as 40 Congress supporters of ward number 14 also joined the BJP in presence of the CM.

He assured the people that the government would fulfil all promises made in the ‘Sankalp Patra’ released for these poll today. He addressed public meetings in favour of party candidates Rajani Bala, Swati Kashyap, Kulbhushan Gupta, Rekha Sahni, Pawan Gupta and Rajesh Thakur in various wards.

He said the government had fulfilled the long-pending demand of granting the MC status to Solan and this would ensure the balanced and planned development of the area.

He accused the Congress of misleading the people, especially residents of the merged rural areas, and said the government was committed to protecting their interests. No tax would be levied for five years in the merged areas. On the lines of MGNREGA, the Urban Livelihood Mission was being implemented and the rights of the people of the merged areas would remain intact.

Thakur said special funds forthe development of towns like Solan would be sought from the Centre. He said a master plan would also be drafted for its planned development and special attention would be laid on cleanliness, beautification, proper sewerage and creation of modern infrastructure.

BJP in-charge for the Solan election Dr Rajiv Bindal, addressing the people, said the CM had provided more than Rs 16.50 crore for strengthening the drinking water system in Solan and Rs 19 crore for other development works. Now, 32 doctors and sufficient paramedical staff had been deputed in the Regional Hospital.

Captain who describes himself as a soldier, committing atrocities on ex-servicemen: Bhagwant Mann