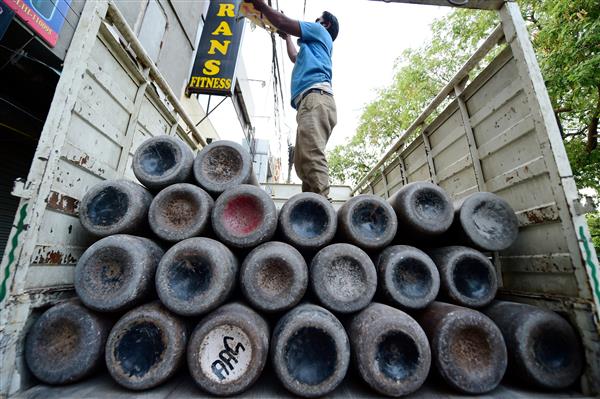 The Sirmaur district administration has constituted a committee headed by the ADC to monitor and regulate the supply of medical oxygen.

The Tribune had highlighted the issue of manufacturing operations underway at eight steel and iron manufacturing units in the district using gaseous oxygen. The Union Home Ministry had restricted the industrial use of oxygen to ensure its uninterrupted supply to Covid patients.

“As many as 318 oxygen cylinders were distributed in government hospitals and 23 in private hospitals in the district today while 248 have been sent to other states. Besides, 30 cylinders were kept in reserve for the Nahan medical college,” said Deputy Commissioner RK Pruthi.

He said the steel manufacturers had made a representation to supply them oxygen and the matter had been taken up with the government. The Assistant Excise and Taxation Commissioner had been directed to check their operations tomorrow.

Pruthi said the committee would assess and regulate the supply of oxygen in all hospitals of the district. It would also ensure that medical oxygen was not sold for non-medical use by the two plants at Paonta Sahib and Kala Amb.

Other members of the committee include the SDMs of Nahan and Paonta Sahib, and the GM of District Industries Centre.

On capping of Trade Margin by Government, prices of Oxygen concentrators come down upto 54%