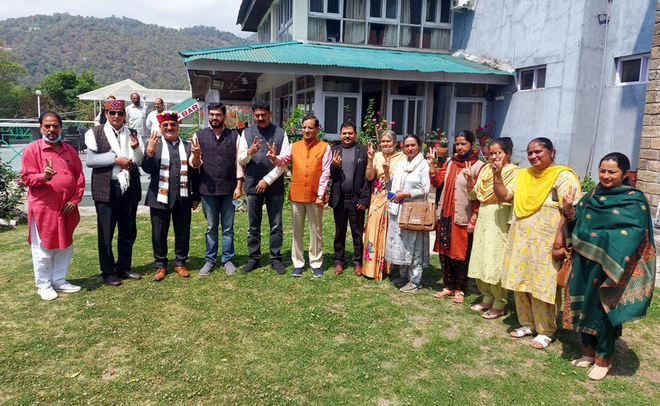 Minister for Forests Rakesh Pathania today paraded nine councillors claiming that the BJP has attained majority in the House of Dharamsala MC that has 17 elected members. Those who were paraded before media today by Pathania were eight elected councillors of the BJP and one independent Sarab Chand Galotia, a BJP rebel. Pathania claimed that two more independent councillors would support the BJP and the party would easily grab the post of Mayor and Deputy Mayor.

Victory of the BJP in Dharamsala MC where party won eight councilors, one short of simple majority, was being attributed to minor management carried out by Rakesh Pathania, who was in charge of party for the elections. Pathania managed to curtail the number of rebels and galvanize support of employees and certain sections of business community to ensure victory for his party.

The BJP has still wrested Dharamsala MC from the Congress

The Congress had 14 out of 17 councillors. The BJP had just three councillors

Interestingly, the BJP lost in Sidhbari, home ward of local BJP MLA, Vishal Nehria and Khaniara the home ward of former BJP minister and Kangra MP, Kishan Kapoor. Wheat surprised many the victory of BJP candidates in Upper Dharamsala where it was facing major dissidence due to allotment of party tickets.

Pathania, while talking to The Tribune, said that the party failed to attain majority in house due to some follies in distribution of tickets. He said that BJP has still wrested Dharamsala MC from the Congress. The Congress in the outgoing house had 14 out of 17 councilors. The BJP, in the last house, had just three councilors, he said.

Pathania said that there were some issues of development among the people of Dharamsala. “Now that BJP was power in Dharamsala MC, I hope that the development projects would be fast paced. Party needs to concentrate on Kangra in view of the forthcoming Assembly elections and mission repeat in 2022 and I will work in that direction”, he said.

Sources here said that the BJP was now pondering over the selection of candidate for the post of Mayor of Dharamsala MC. The decision to select the candidate for mayor is likely to be taken by the party high command. The sources said that name of an independent from Sidhpur, Dimple Thakur was in fray for the post of mayor despite the fact that she was not present among the candidates who were paraded before the media.

‘Elephant In The Womb’: Kalki Koechlin turns author with book on motherhood

Hospitals not displaying rates to be booked: Haryana Minister