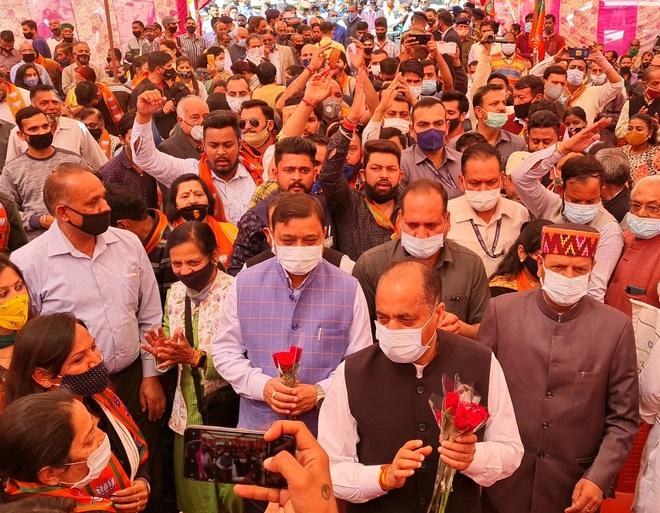 Chief Minister Jai Ram Thakur said today that rural areas could be re-merged into panchayats if their residents desire so in the future as the population of the Solan Municipal Corporation would cross the stipulated 50,000 mark after the 2021 Census.

While addressing a slew of poll rallies in various wards, he urged people not to be “misled by the canards spread by the Congress” and said no tax would be levied for the next five years. He thanked the residents of all peripheral villages adjoining Solan for constituting the Municipal Corporation.

He said three fastest developing towns-Solan, Palampur and Mandi- had been upgraded into corporations in a planned manner. He said Solan had the strongest claim in view of its rapid development.

The Chief Minister while urging the people to vote for BJP candidates said the state government had ensured balanced and equitable development of all areas, especially those which had remained neglected during the Congress tenure. He also accused the Congress leaders for “misguiding” people by raking up non-issues in a bid to divert attention from core issues of development.

Being the maiden municipal corporation polls in Solan after its upgrade, the BJP was sparing no effort to woo the electorate as the

Chief Minister rushed from one ward to another to address voters. Though the Congress raised questions at this macro level of campaigning, Thakur said they should not tell him what to do.

State BJP president Suresh Kashyap, who also accompanied the CM, said the former Congress government failed to accord Municipal Corporation status to Solan due to “vested interests” while the BJP government had fulfilled this long-awaited demand.

No social distancing at election rallies

Haryana restricts physical attendance in govt offices to 50 per cent