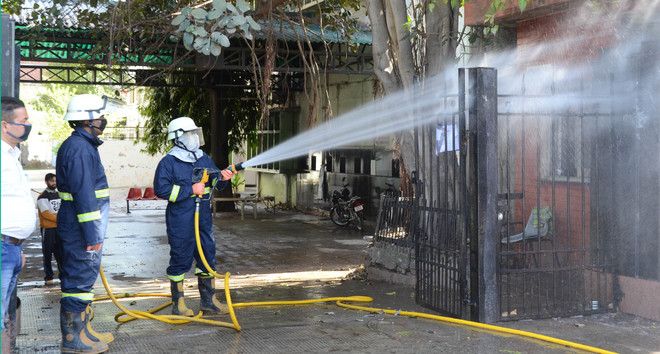 Members of the HPU NSUI unit sanitised the bus stand, sabzi mandi and areas around the DDU hospital in Shimla on Wednesday. They also distributed masks among people. The NSUI said it had been carrying out activities such as the distribution of ration, masks etc for the past one year.

Medical graduates, who have secured their MBBS degree from abroad, have to undergo a one-year compulsory internship in India. Currently, 45 foreign medical graduates are pursuing their internship at the IGMC, Shimla; the Tanda medical college and the Nerchowk medical college. These interns are, however, not being paid any stipend during this period, whereas medical graduates from these colleges are being paid Rs 23,000 per month as stipend. Foreign medical graduate (FMG) interns of the IGMC have now written a letter to Chief Minister Jai Ram Thakur seeking his intervention. They said not paying them stipend was the violation of Article 14 of Constitution, which envisages equal pay for equal work.

Pramod Mahajan, Additional Director, Higher Education, and Hitesh Azad, Joint Director, Elementary Education, have been appointed nodal officials for the overall monitoring of e-learning programme under the ‘Har Ghar Pathshala’ initiative. While Mahajan will monitor classes IX to XII, Azad will oversee class 1 to VIIII. Besides, official in-charges for each district have also been appointed. All district officials will submit their daily reports to Azad.