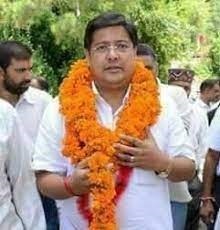 Ashish Butail, local MLA and general secretary of the state Congress today said that the Congress would easily elect its mayor and deputy mayor in the Palampur municipal corporation.

Addressing news conference here this evening Butail stated that after the distribution of party tickets there appears a vertical spilt in the in the BJP as over half dozen BJP leaders had announced to contest as independent. He predicted that the Congress would easily capture more than 12 seats in the elections.

He said the residents of Palampur were disillusioned because of wrong policies and planning of ruling government and neglecting development of Palampur. He said over one dozen foundations stones were laid by the CM in last three years in Palampur but no construction was taken up. Liberal funds were given to adjoining constituencies but Palampur received step motherly treatment.

He alleged hospitals were in bad shape, posts of doctors and para medical staff were lying vacant, public was forced to move out of the state for medical treatment.