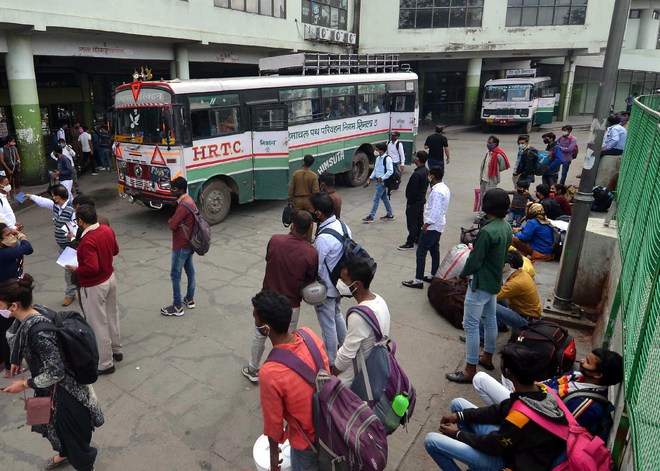 There was a virtual scramble among people to reach their native places ahead of complete ban on private and public transport from tomorrow onwards as over 22,000 persons applied to seek an e-pass to enter Himachal from outside.

On May 8, a total of 9,506 persons sought e-pass by registering on the Covid portal. Of this, 6,486 were granted the e-pass through the respective SDMs. Today, a total of 6,796 registrations (12,537 persons) were made on the Covid portal to enter Himachal and 3,492 were given approval by the respective SDMs. A large number of 2,336 registrations were rejected for not furnishing complete information, while 968 are pending.

Earlier, the state government had only made registration mandatory for entering Himachal, but after fake names of Donald Trump and Amitabh Bachchan were used two days ago to seek entry, now an e-pass from the SDM concerned has been made mandatory.

With all public and private transport across the state to remain suspended from tomorrow, the bus stands across the state were overflowing with people who wanted to reach their native place. With all private and government offices to remain closed and most works being banned, a large number of migrant labourers could be seen heading homewards, both within and outside the state.

In Kangra, there are 8,500 active cases and almost one death taking place every hour. Deputy Commissioner Rakesh Parajapati said there were more than 8,000 people under home quarantine and 550 in institutional quarantine in the district. He added that the relaxation period would be from 8 am to 11 am and only one family member could venture out to make purchases.

Banks in Kangra will remain open from 10 am to 2 pm and post offices from 9 am to 1 pm. Construction can be undertaken only with the onsite material and the labour too has to be kept on site. Dhabas can remain open only on national highways, while vehicle repair workshops can operate only on state and national highways.