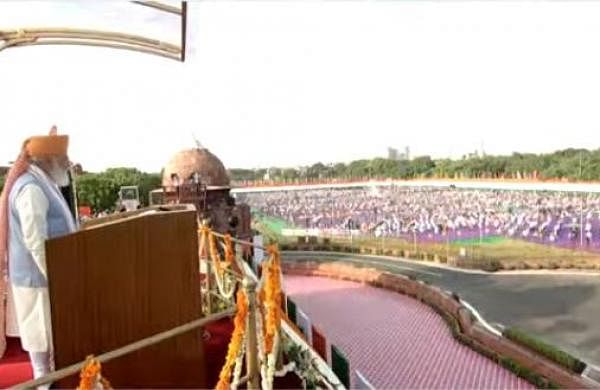 NEW DELHI: Prime Minister Narendra Modi on Sunday hoisted the National Flag from the ramparts of Red Fort to celebrate the 75th Independence Day of the country.

He is currently delivering the customary address to the nation from the ramparts of the Red Fort.

India has to march ahead with new pledges for the next 25 years, PM Modi said while addressing the nation.

“We have to ensure we meet our goal of building Aatmanirbhar Bharat when we celebrate 100 years of India’s Independence,” the prime minister said.

People can take pride that the world’s largest Covid vaccination programme in going on in the country, he said.

He lauded doctors, nurses as well those involved in vaccine manufacturing and others involved in fighting COVID-19.

Pain was one of greatest tragedies of last century, the prime minister said while asserting that August 14 will be remembered as Partition Horrors Remembrance Day.

He also lauded India’s Olympic contingent, which was present at the Red Fort, and said their performance encouraged the youth of the country.

The Prime Minister had launched ‘Azadi Ka Amrit Mahotsav’ from Sabarmati Ashram at Ahmedabad in Gujarat in March 2021 to celebrate 75 years of India’s Independence. The celebrations will continue till August 15, 2023.

Meanwhile, farmers have proposed tractor parade in the national capital on Independence Day against the three farm laws introduced by the Central government last year.

Speaking to ANI, a farmer said, “Around 5,000 vehicles and 20,000 farmers will take part in the parade on Sunday. We are ready for the protest. Our protest is against the three farm laws. Women are leading this protest. We want to show the government that we are not broken. The protest is on.”

Delhi Police Commissioner Rakesh Asthana informed that they have been talking to farmer leaders and Delhi borders have been sealed.

Delhi Traffic Police had also issued an advisory for the Independence Day function at the Red Fort to ensure safe and smooth flow of vehicles across the city.

A series of events are being organised across the country to mark the occasion.

President’s greetings on the eve of Parsi New Year