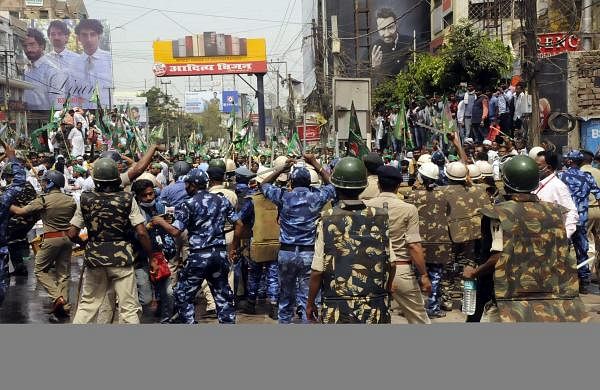 PATNA: Rashtriya Janata Dal (RJD) leader Tejashwi Yadav on Wednesday demanded an apology from Bihar Chief Minister Nitish Kumar following a ruckus in the state assembly over the Bihar Special Armed Police Bill 2021. He also threatened to boycott the remaining assembly sessions in the tenure of the current government if Kumar doesn’t issue an apology for the same.

“If Nitish Kumar does not apologise for the incident, we may boycott the assembly for the remaining tenure. ‘Nirlaj Kumar Ji’ has lost all shame,” he added.

Meanwhile, an FIR has been registered against Tejashwi and his brother Tej Pratap Yadav, along with several unnamed party workers, for the protest they carried out on Tuesday against the Bihar Special Armed Police Bill 2021. Police resorted to baton- charge and had also used water cannons to maintain the situation.

On Tuesday evening, the assembly session witnessed multiple adjournments as the RJD leaders shouted slogans against the bill. After a few Opposition leaders prevented Speaker Vijay Kumar Sinha from leaving his chamber, police personnel reached the assembly premises to evict the MLAs. Women MLAs of the Opposition were carried out of the assembly building by women security personnel.

RJD leader Jagdanand Singh also condemned the incident and said: “The ruling government in Bihar has made ‘mockery’ of Bihar.”

RJD claims that that the Bihar Special Armed Police Bill means that search will be conducted without a warrant and “any policemen can arrest if he believes something is wrong”.

Accusing teacher of harassment, boy dies by suicide in Chhattisgarh

Punjab clamps down strit lock down, total shut down on Sundays, fliers to show negative report