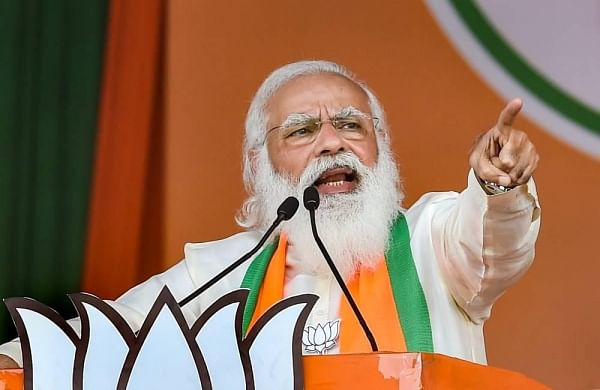 KOLKATA: Nandigram has already voted, but the BJP continued to use TMC chief Mamata Banerjee’s decision to contest against Suvendu Adhikari as a political tool to gain electoral dividend in the next six phases of the election.

Prime Minister Narendra Modi, while addressing a rally in South 24-Parganas on Saturday, said Mamata should accept her defeat in Nandigram and she should not contest from another seat as her twin defeat will lead to the TMC’s disappearance from Bengal’s political landscape. Union Home Minister Amit Shah and other heavyweights of the saffron camp echoed the same.

Since the TMC is believed to be a ‘one-person’ party, BJP’s effort to portray Mamata Banerjee as a loser appears to be the saffron brigade’s game plan to demoralise TMC cadres and electorates having allegiance to the ruling party before the third-phase poll on April 6. It seems to be a well chalked-out plan as Mamata contested against her former cabinet colleague Suvendu Adhikari.

“From your home, you went to Nabanna on a scooter. Then you went to Nandigram where you are going to lose with huge margin. Defeat is standing in front of you (Mamata). Accept it, Didi. I have heard, though could not verify, that now a section of your educated party colleagues is saying your decision to contest from Nandigram was a wrong one. I also heard you are planning to contest from another seat. If you do, it will be another wrong decision, Didi. Because your twin defeat will lead to the TMC’s disappearance from the electoral landscape of West Bengal,” Modi said in his speech in a rally at Sonarpur, South 24 Parganas, a TMC’s stronghold.

Mamata recently rode a scooter in protest against the hike in fuel prices.

BJP national president JP Nadda also echoed the same that he had come to know from TMC insiders that Mamata is going to contest from another seat. Following the footprint of Shah and Nadda, Modi on Saturday continued to highlight Mamata as a loser in a public rally despite the Bengal CM announced, while addressing a rally on Friday, that she will not contest from any other seat.

“Mamata Banerjee is the one and only face of the party. Now, we are going to face elections in south Bengal districts in the next few phases which is known as the TMC’s strongholds. If a message can be delivered that her defeat is confirmed, her followers and the ruling party’s voters will get scared and subsequently, it will give us electoral dividend in the next phases,” said a BJP leader.

TMC MP and spokesperson Saugata Roy said the BJP is trying to play the game of fear psychosis which will not work.

Busy on phone call, nurse gives two doses of Covid vaccine to woman in UP

ThinkEdu Conclave 2021: A bit of rebelliousness is good, Swami was one