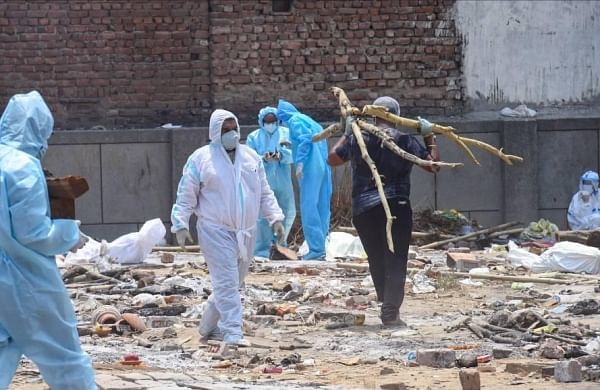 PATNA: A video purportedly showing a Covid-19 victim’s body being dumped into the bank of the Saura river in Bihar’s Katihar district has gone viral on social media.

Katihar’s District Magistrate Udayan Mishra has verified the video clip and found it to be true. The incident took place on May 7.

“Soon after we have learnt about the incident, an inquiry panel headed by city’s Magistrate, SDO and SDPO of the area, was constituted who later visited the Bheria Rahika village on Sunday. During the investigation, it was found that the person died of Covid on May 6,” Mishra told this newspaper.

“As per the statement of the deceased’s brother, his family did not have enough money to cremate the body. Moreover, the villagers told the family members that the cremation of the Covid victim could be hazardous to health for others. Hence, they had dug an 8 feet deep pit in their own land to bury the body,” Mishra said.

“After the patient, a wage labourer, had succumbed to Covid in Sadar hospital, the hospital administration then sent the body in an ambulance to the village on May 7. During the process of burial, some onlookers filmed it and made it viral on social networking platforms,” Mishra said.

The DM denied that the body was dumped by the ambulance driver Vishnu Jha and other staff of the hospital.

“When we spoke to the victim’s son, he admitted that the family was unaware that the government pays for the last rites of a Covid-19 patient and that’s why they had decided to bury the body,” the DM said.

He added that the body was not exhumed as per the consent of family members and the Covid-19 guidelines. He said the family will get compensation of Rs 4 lakh as announced by the state government for Covid-19 victims.

Seventy more people succumbed to COVID-19 in Bihar raising the states death toll on Sunday to reach 3,282 though a drop in the positivity rate also caused the active caseload to decrease and the recovery rate to improve.

According to the state health department, 11,259 fresh cases were reported compared with the recent past when the number of people testing positive, on an average, stood between 13,000 and 15,000 on a daily basis.

The recovery rate, which remained under 80 per cent for a couple of weeks, has also reached 80.71 per cent.

Altogether 5.91 lakh people have tested positive for COVID-19 in Bihar ever since the pandemic struck in March last year.

The day also saw vaccination for those aged between 18 and 44 years of age getting underway.

Although it was scheduled to begin on May 1, a delay in supply of vials caused the process to be deferred by a week.

The department could not provide the number of people in the aforesaid age-group who received jabs on the inaugural day.

The number of people aged above 45 and those in professions like healthcare, who have been vaccinated in the state, has crossed 80 lakhs.

A video of the body being dumped into the bank of the Saura river in Bihar’s Katihar district had gone viral on social media.

“As per the statement of the deceased’s brother, his family did not have enough money to cremate the body. The villagers told the family that the cremation of the Covid victim could be hazardous to health for others. Hence, they had dug an 8 feet deep pit to bury the body,” the DM said.

Underwriters puzzle over how to make pandemics insurable again