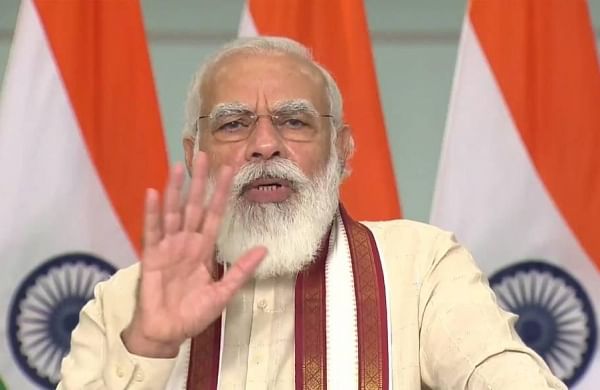 NEW DELHI: In an apparent bid to counter the flak the Centre has drawn from international media, on its handling of the second wave of Covid-19 and the rising number of deaths,

BJP ministers and workers tweeted an ‘opinion’ piece on PM Narendra Modi ‘working hard’ and urged readers to not fall into traps laid by the opposition.

The so-called opinion piece appeared on a website ‘The Daily Guardian’ owned by iTV Network.

However, this was not the only website doing the rounds on Twitter to counter the press coverage in India and abroad.

There was ‘The Australian Today’ which put out another ‘opinion’ piece.

“Besides COVID-19, India is also fighting with vulture journalists, who are spreading more panic and despair than pandemic”, in an apparent reaction to the work of senior journalist Barkha Dutt.

An analysis of its domain showed no e-mail, registrar abuse contact or phone number, with only a tech contact name Jitarth Jai Bharadwaj, who is also editor-in-chief on the site’s ‘about us’ page. For The Daily Guardian, the domain was registered in UP, according to technical analysis.

The article titled “PM MODI HAS BEEN WORKING HARD; DON’T GET TRAPPED IN THE OPPOSITION’S BARBS” is written by Sudesh Verma, who represents BJP as a spokesperson on TV debates.

Union ministers Pralhad Joshi, Kiren Rijju, Anurag Thakur, BJP’s IT cell chief Amit Malviya and Verma were among those who tweeted the article.

The tagline of the article claimed key points ought to be brought to the attention of people “busy making PM Modi the scapegoat”.

Verma tweeted, criticising the uproar over the name of the newspaper.

Twitterati criticised the timing of the piece and the name of the website, which bears resemblance with a famous UK publication.

They called it the BJP government’s ‘propaganda’, at a time when it has attracted global bad press. Social media users expressed displeasure also over the headline of the article, written in all caps, and called it a toolkit for propaganda.

The Facebook page of The Daily Guardian shows it was started in April, 2020. Its Twitter page reads “The Daily Guardian: Finest Daily Newspaper of the country. E-paper @e-paper.thedailyguardian.com”.

The Australian Today’s website claims it is an online news portal dedicated to narrative journalism.

“It offers the biggest names and best writing in news, culture, and analysis, with a particular focus on
Australia and Indian subcontinent,” the site says.

'Our joining Quad not China’s business': Dhaka hits back at Beijing