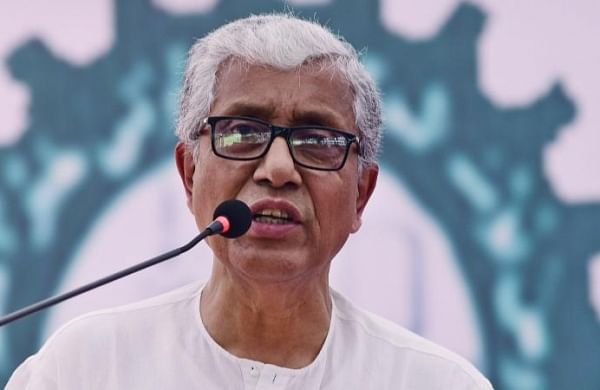 AGARTALA: Leader of the Opposition in Tripura Manik Sarkar on Monday alleged that hooligans patronised by the ruling BJP in the state had attacked CPI-M delegates when they visited the house of party supporters at Shantirbazar in South Tripura district.

The police, however, claimed that unidentified youths had thrown stones but none was injured.

Sarkar, also CPI-M Politburo member and former chief minister, said the delegates had gone to the houses of party supporters who were allegedly attacked by BJP goons on Wednesday when they were celebrating the birth anniversary of social thinker Karl Marx before a CPI-M party office.

The delegates were led by Sarkar and the others were the Deputy Leader of opposition, Badal Chowdhury and others.

The BJP hoodlums showed them black flags and chanted slogans ‘Go back Sarkar’.

The police allegedly asked the delegates to return in view of the situation.

When the delegates were returning to the main roads , the attackers brickbatted them, he said.

Nirupam Datta, the subdivisional police officer of Shantirbazar said none was injured in the incident and the police had to resort to lathicharge to disperse the attackers and provide protection to the CPI-M delegates.

Sarkar alleged that the state director general of police was informed of the CPI-M leaders’ visit in advance but still they were attacked.

“It was a pre-planned attack, which could not have been possible without the indulgence from the state leadership.

The law and order had collapsed in the state and attacks on CPI-M party workers are increasing day by day, he said.

Tripura Education Minister and cabinet spokesperson, Ratan Lal Nath that the attackers were not BJP workers.

They are former CPI-M activists, who were deprived and exploited during the 25 year-long misrule of CPI-M.

They attacked their party leaders in revenge, Nath, who is also a prominent BJP leader told reporters.

The CPI-M is trying to create panic and “fish in troubled water,” he added.