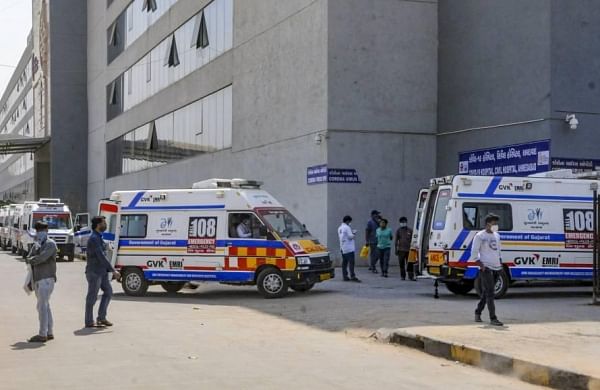 AHMEDABAD: The Gujarat government on Monday told the high court that in view of a downward trend in daily COVID-19 cases, the state is currently in a position to meet the demand for medical oxygen and will request the Centre to augment supply only if the current trend reverses.

In a reply to the Gujarat High Court hearing a suo motu PIL on the COVID-19 situation, Principal Secretary (Health) Jayanti Ravi said the number of daily new cases has seen a decreasing trend since the past few days.

Based on the current trend, the oxygen demand and consumption in Gujarat is estimated to stay around 1,250 metric tonnes (MT) for the next 4 to 5 days, and thereafter, show a decreasing trend at a rate of 100 MT per week, she said.

“This estimation, however, is assuming that there is no trend reversal in daily positive cases reported,” she said in an affidavit filed before a division bench of Chief Justice Vikram Nath and Justice Bhargav D Karia.

The state government submitted its affidavit in the HC on Monday, but the matter which will come up for hearing on Tuesday.

Chief Secretary Anil Mukim had, in a letter, requested the central government to enhance the allocation of oxygen to the state as its requirement is projected to go up from 1,250 MT on April 30 and 1,400 MT on May 6 to 1,600 MT by May 15.

Mentioning this in the affidavit, Ravi said ever since the last demand was made on May 5, there has been some improvement in the COVID-19 situation.

But the state is keeping a close watch on daily new cases, “so that extra oxygen demand can be immediately put up to the central government with a request to increase allocation, if the need for the same arises”, the affidavit said.

The state is witnessing a stabilisation in demand for medical oxygen, which is used to treat serious COVID-19 patients, the Principal Secretary said.

“It would be necessary to watch new case detection for a few more days before arriving at any conclusion with respect to reduction in (oxygen) demand,” it added.

With inter-departmental coordination, the state is able to manage oxygen demand and supply, and is keeping a close watch on daily new case trend, Ravi said.

The government further said despite the stress on the overall system, the state has been able to fulfil the demand of medical oxygen through various alternative sources.

The affidavit said in the two weeks between April 23 and May 7, the average demand for oxygen in the state was 1,232.3 MT amid a dip in supply due to a shutdown of two plants on two days and a 6-hour-long slowdown in another unit.

The state is procuring liquid oxygen from five production facilities, it said.

The government is procuring 100 to 120 MT perday of oxygen in liquid or gaseous form from 24 PSAs/ASU (Pressure Swing Absorption/Air Separation Units) plants in Gujarat, Ravi said.

“All seven PSA plants sanctioned by the central government under PM Cares Fund have beenoperationalisedand are supplementing oxygen supply directly at the respective hospitals.

“Efforts are underway to convert 15 nitrogen PAS plants into oxygen PSA plants, to add 25-30 MT of generation capacity,” it said.

As far as Remdesivir injection is concerned, on an average, the state government has met 77 per cent of its demands made by each of the 33 districts between April 1 and May 5, the affidavit said.

Remdesivir is an anti-viral drug widely used in treatment of COVID-19 and its demand has shot up dramatically during the second wave of the pandemic.

Renowned doctors who are part of the Gujarat government’s COVID-19 task force on Monday said 80 per cent coronavirus patients recover through proper medication and rest, and called for careful use of Remdesivir which has seen a scramble during the second wave.

They said people should not panic thinking they would need an ICU bed once they contract COVID-19 as only 20 per cent patients need supportive care.

The doctors suggested a judicious use of Remdesivir, claiming it is not a life-saving drug.

Remdesivir is an anti-viral drug widely used in treatment of COVID-19 and its demand has shot up dramatically during the second wave of the pandemic.

“People with mild symptoms must not panic. It is a false notion that every patient needs an ICU. 80 per cent patients recover only through proper medication and rest.”

“Only 20 per cent are hospitalised for symptomatic supportive care,” said Dr Atul Patel, an expert in infectious diseases.

Dr Patel along with other medical experts who are part of the government’s task force on COVID-19 addressed the media in Gandhinagar after attending a meeting with Chief Minister Vijay Rupani.

“There is no evidence which proves that Remdesivir is a life-saving drug. It does not even reduce mortality rate. It only reduces hospital stay and should be given to those having low oxygen saturation and admitted in the ICU.”

“It is also useless to give this drug as soon as someone is found positive,” Dr Patel was quoted as saying in an official release issued after the press meet.

Expressing concern over the new threat posed by Mucormycosis, a serious fungal infection found in some COVID- 19 patients, Dr Patel said coronavirus along with high diabetes and use of steroids provide a conducive environment for the fungus to grow in the body.

While the mortality rate due to the fungal infection before the pandemic was 52 per cent in the state and used to infect people with high diabetes, it has come down to 38 to 45 per cent after the emergence of coronavirus, he said.

Dr Dileep Mavlankar, Director of the Indian Institute of Public Health at Gandhinagar, said people need to be extra careful and be prepared for a possible third wave of coronavirus.

A detailed action plan will be chalked out in the coming days to tackle a possible third wave, said Chief Minister Vijay Rupani on Monday.

In view of the possibility of the “third wave” hitting India, as predicted by healthcare experts, the CM held a meeting with top doctors, who are part of the government’s task force on COVID-19, and scientists of the Gujarat Biotechnology Research Centre (GBRC) here to formulate a state -level strategy, said an official release.

During the meeting, it was decided to chalk out a detailed action plan in the coming days to tackle the possible third wave by strengthening health infrastructure, increase the number of oxygen-equipped beds and formulate treatment protocols for a better response, it said.

Rupani told participants that the focus in the third wave will be to minimise both deaths as well as coronavirus infections, according to the release.

He stressed that mass vaccination against COVID-19 holds the key to effectively tackle the new wave.

Rupani said the recent decline in fresh coronavirus cases in Gujarat was a result of “collective efforts” of healthcare workers, doctors and people.

During the meeting, doctors also discussed ways to tackle Mucormycosis, a serious but rare fungal infection which is now affecting coronavirus patients having other health issues, the release added.

Ahmedabad also accounted for 20 deaths, followed by Jamnagar with 14, Vadodara 12, Surat and Rajkot 11 each, eight in Junagadh, he added.

In Dadra and Nagar Haveli, Daman and Diu, 63 COVID-19 cases and 193 recoveries were reported on Monday, taking its tally to 9,075, including four deaths, and the recovery count to 7,702.

An official said the UT has an active caseload of 1,369.

‘Congress misleading people, will be remembered for duplicity and pettiness’: Nadda hits out at Sonia

'Congress misleading people, will be remembered for duplicity and pettiness': Nadda hits out at Sonia

NCL contributes Rs. 10 Crore to MP Government to support its fight against COVID