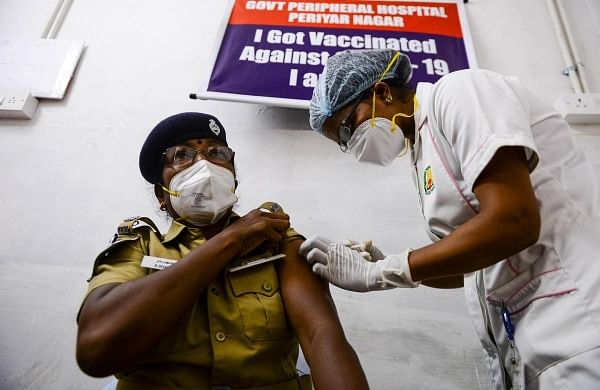 NEW DELHI: An expert panel on Covid vaccination in the country has now recommended increasing the gap between two doses of Covishield to 12-16 weeks, deviating from European Union and UK suggestion to follow a 12-week interval between two shots of the AstraZeneca vaccine.

The National Expert Group on Vaccine Administration for Covid, headed by VK Paul, who is also a Member (Health), Niti Aayog, has also suggested that those who have recovered from Covid infection, should get the vaccine against coronavirus 6 months after the recovery.

Both these decisions, though yet to be formally accepted by the Union Health Ministry, are likely to be approved soon.

The gap of 12-16 weeks for this vaccine, originally developed by AstraZeneca-Oxford University and being manufactured by Serum Institute of India locally has not been tested in clinical trials.

Experts pointed out that the decision could be triggered by the vaccine shortage, rather than any scientific rationale.

“This recommendation was not accepted earlier but has now been extended beyond 12 weeks now,” said a member of the Covid19 task force. “There was no scientific rationale then not to go by the international precedence, and there seems none now except that there is an acute vaccine shortage in India.”

The government recently had also suggested a gap of 4-6 weeks between two doses of Covaxin, even though, in clinical trials the vaccine has been tested with only a gap of 28 days.

Meanwhile, NEGVAC endorsing a 6-week gap for Covid vaccination following recovery from the infection is also being met with some skepticism. Incidentally, this comes just days after ICMR director general Balram Bhargava said those who have battled Covid successfully, can get vaccine 6 weeks following their recovery.

“So far, I have not come across any scientific evidence which suggests that people who have had the infection before should wait for six months for their shots against Covid,” said immunologist Seyed Hasnain.

Some others however explained that this recommendation may have stemmed from research findings showing that antibodies against SARS CoV2 generally stay in the body till at least 6-8 weeks after getting infected.

“The focus now seems to make the Covid vaccine available to as many people as possible and therefore all possible ways — scientific or otherwise, are being tried out,” said the task force member.

Can’t send someone to war without gun: HC on need for vaccinating lawyers going to prisons