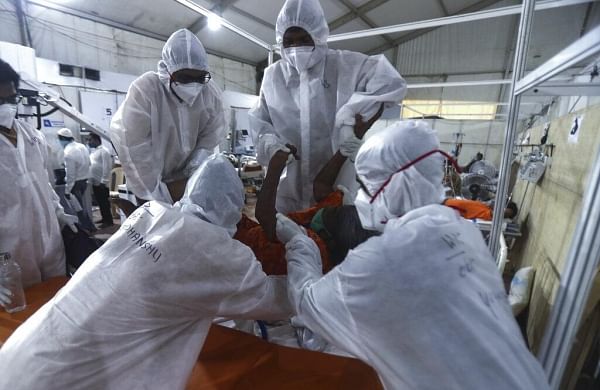 THANE: Two COVID-19 patients have died due to mucormycosis, a serious but rare fungal infection, in Maharashtra’s Thane district, a health official said on Wednesday.

Besides, six other patients are currently undergoing treatment for the disease, also known as black fungus, the official said.

A 38-year-old patient from Mharal in Thane rural and another one from Dombivli town died of the fungal infection while undergoing treatment at different COVID-19 care centres in Kalyan Dombivli Municipal Corporation (KDMC) limits, the civic body’s health officer Dr Ashwini Patil said.

Six other patients were undergoing treatment for mucormycosis and two of them were admitted in the ICUs, she said.

The official also said COVID-19 patients need not panic as this fungal infection is mostly being found in those having diabetes.

Such patients need to keep their blood sugar level under control, she said.

Mucormycosis is being detected in COVID-19 patients and there should not be an excessive use of steroids for their treatment, the official said.

According to health experts, the symptoms of mucormycosis include headache, fever, pain under the eyes, nasal or sinus congestion and partial loss of vision.

On Tuesday, Maharashtra Health Minister Rajesh Tope said there could be over 2,000 mucormycosis patients in the state as of now and with more and more COVID-19 cases coming up, “their number would increase for sure”.

Symptoms of Mucormycosis, also known as black fungus, include headache, fever, pain under the eyes, nasal or sinus congestion and partial loss of vision.

He said, There could be over 2,000 Mucormycosis patients in the state as of now and with more and more COVID- 19 cases coming up, their number would increase for sure.”

The state government has decided to select hospitals attached to medical colleges for treatment of Mucormycosis patients as it demands a multidisciplinary approach, Tope said.

He said black fungus has a 50 per cent mortality rate and is found in COVID-19 patients with suppressed immunity or co-morbidities.

“A Mucormycosis patient needs to be seen by various experts such as ENT, ophthalmologists and neurologists among others. We are trying to cover most of the treatment under the Mahatma Phule Jan Aarogya Yojana (the state’s flagship health scheme), “the minister said.

Commenting over the costly treatment, he said, I will be writing to the National Pharmaceutical Pricing Authority to bring down the MRP of medicines needed for Mucormycosis treatment.”

Amphotercin-B is a key medicine required for treatment of such patients.

Haffkine (a state-run pharma firm based in Mumbai) is going float a tender for one lakh injections of the drug, Tope said.

Of the 793 fatalities, 403 had occurred in the past 48 hours, while 170 took place last week and 220 people died before the last week, but were added to the toll on Tuesday, the department said.

Statewide recoveries were much higher than the new cases.

As many as 71,966 patients were discharged from hospitals during the day, taking the count of recoveries in Maharashtra to 45,41,391, it said.

The state’s COVID-19 recovery rate now stands at 87.67 per cent, while the fatality rate is 1.49 per cent, the department said.

The Nashik administrative division reported 6,482 cases and 141 deaths on Tuesday.

A majority of the infections were reported from Nashik city (1,069) and Ahmednagar district (2,851).

Out of the 141 fatalities, 53 and 16 people died in Nashik city and Ahmednagar district, respectively, the department said, adding another 11 patients died in Nandurbar.

The Pune division reported a surge in cases with Pune rural areas accounting for 3,643 cases out of the divisions total count of 11,191.

Other districts and main cities in the division reported cases in four digits – 2,581 in Pune city, 1,441 in neighbouring Pimpri-Chinchwad, 1,694 in Solapur rural and 1,580 in Satara district.

Out of 93 deaths in the division, 28 were reported from Solapur district, 23 in Pune rural, 18 in Pune city and 20 in Satara, the department said.

Sindhudurg reported the death of 18 patients, while this figure for neighbouring Ratnagiri district was 12.

Out of 155 deaths in the division, 61 were from Beed, 30 from Nanded, 32 from Latur district and 15 from Osmanabad district, the department said.

Out of the Akola divisions 4,376 new COVID-19 cases, 1,332 came from Buldhana district, which reported zero deaths.

Also, 58 deaths were reported in the division of which Amravati and Yavatmal districts registered 14 and 12 fatalities, respectively, the health department said.

The Nagpur divisions caseload saw an addition of 5,438 cases, including 1,428 from Nagpur city.

The city also added 52 deaths to the divisions tally of 122.

The other districts with high deaths in the division were Chandrapur (20) and Bhandara (14), the department said.