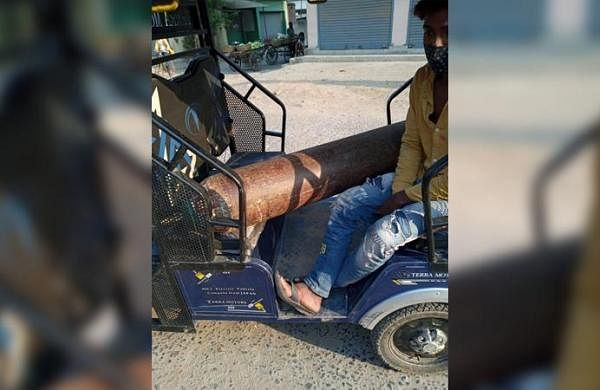 PATNA: Minting money at a time of this crisis, a man along with nine of his friends has been sent to jail after he sold an oxygen cylinder for Rs 1,10000 to a coronavirus patient.

Harsh Raj, a native of Motihari, and his friends have been making fast bucks by selling oxygen cylinders at higher prices to infected patients living in Rajiv Nagar area of Patna.

On receiving a tip-off via WhatsApp message that was shared with the additional director general of police of economic offence unit (EOU) of Bihar, a team was formed to nab Harsh and his accomplices.

Speaking to reporters, ADG Nayyar Husnain Khan said that the accused was arrested for black marketing of oxygen cylinders at exorbitant prices.

Five days back, a US-based NRI shared a message with ADG on WhatsApp stating how a relative of his was forced to shell out Rs 1,10000 while he was isolating at home. “The money was transferred in the name of Harsh Raj in his account in Bank of Baroda,” Khan said.

Following this, a team headed by DSP Bhaskar Ranjan and DSP Rajneesh Kumar apprehended the fraudster after laying a trap. They masqueraded as customers who were in urgent need of oxygen cylinders.

The team swung into action and started a scientific surveillance upon Harsh Raj through his bank details where approximately Rs nine lakh was deposited over a period of six days.

On interrogation, Harsh confessed to his crimes and led to the arrest of his friends who were helping him run this black market.

The ADG informed that Harsh and his friends managed to earn close to Rs 12 lakhs in a week’s time by selling oxygen cylinders in black-market.