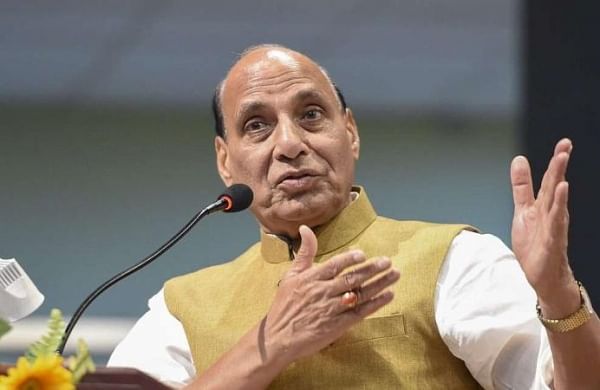 JOYPUR: Taking a dig at the Trinamool Congress-led West Bengal government, Union Defence Minister Rajnath Singh on Thursday said that the sound of bombs is being heard in the state instead of Rabindra sangeet and bomb-making factories are seen from where Vivekananda’s messages used to propagate.

Taking a dig at the Trinamool Congress-led West Bengal government, Union Defence Minister Rajnath Singh on Thursday said the sound of bombs has taken the place of Rabindra sangeet and bomb-making factories are seen from where Swami Vivekananda’s messages used to propagate.

Singh while addressing a rally at West Bengal’s Joypur said, “Nowadays Mamata is talking about violence during campaigning. But when Mamata came to power she talked about providing security to the Ma, Mati and Manush. But no one in the state is safe.”

“The sound of bombs are being heard in the state where Rabindra sangeet was once heard. There are several factories in the state manufacturing bombs in a state were once the messages of Swami Vivekananda were propagated,” he said.

Targeting the West Bengal Chief Minister Mamata Banerjee, the union minister repeated that no one can stop BJP from winning over 200 seats in the assembly polls.

“I am absolutely sure that BJP will win more than 200 seats in West Bengal polls. Bengal government should understand that in a democracy, the government runs through Constitution and not arrogance,” Singh said.

“I belong to the party which was formed by Syama Prasad Mukherjee, a Bengali. No one is an outsider here as everyone is born in our motherland,” Singh said while attacking Mamata’s charge of BJP being an outsider party.

“I assure you that the BJP government after coming in power will provide security to every person in the state and will not discriminate on the basis of their ideology,” he added.

One dead, one injured in shooting near Paris hospital

Privileges Committee to deal with denial of courtesy to MLA cases