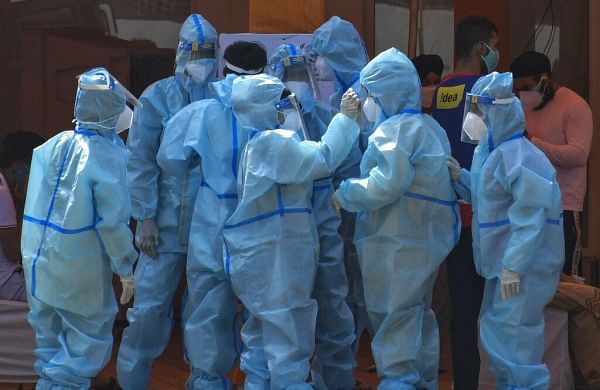 NEW DELHI: The Delhi High Court has asked the Centre whether demand for COVID-19 drug Tocilizumab, which is in short supply, would be reduced if drug major Roche provides its new antibody cocktail that has been approved for emergency use in India for coronavirus patients.

The court also asked the Centre what quantities of the antibody cocktail would be required for the purpose of reducing demand for Tocilizumab.

The query was posed to the government by Justice Prathiba M Singh after Roche India, which supplies Tocilizumab in India, told the court it can only endeavour to supply the medicine and cannot assure to meet the market demand for the same, even though patients are willing to pay for it.

The court noted that the global manufacturing figures of the drug have not been filed before it by Roche despite specific directions.

Another reason given by Roche for not being able to supply Tocilizumab was that the antibody cocktail of Casirivimab and lmdevimab medicines “may be a better treatment for COVID-19 patients”.

The drug major told the court that its “current focus” was to supply the said antibody cocktail and 1,00,000 doses of the same is likely to be sent to India by the end of May.

As Roche was unable to give any assurance regarding supply of Tocilizumab and since it was required by patients here, the court asked the Centre how it intended to obtain the medicine through the drug major or its global manufacturers, FHoffman-La Roche Ltd in Switzerland and Chugai Seiyaku Kabushki Kaisha in Japan.

The court also asked the government when the results for the phase III trials of Tocilizumab, approved in favour of two Indian companies – Hetero Biopharma Ltd., and JSS Medical Research India Pvt.Ltd — was expected and what were the applicable guidelines.

It asked the Centre to file an affidavit answering the queries two days before the next date of hearing on May 27.

During the hearing on May 12, Roche told the court that a consignment of 45,000 Tocilizumab 80 mg vials, which would cater to around 9000 patients, arrived in India last week in the form of humanitarian aid extended by it.

Besides that 1,00,000 vials of Tocilizumab 80 mg, to cater to 20,000 doses, had also been imported by Roche India, prior to the stipulated date of May 15 and the same was scheduled to reach its distributor Cipla Ltd, the drug major told the court.

Cipla, represented by advocate Archana Sahadeva, told the court that according the Clinical Guidelines for the management of Adult COVID-19 patient protocol issued by the ICMR on April 22, Remdesivir, Tocilizumab and convalescent plasma are the three drugs which can be used on an off label basis for the treatment/ management of COVID-19 patients, in certain specific circumstances.

The ICMR could consider revising the said guidance protocols, in case of presence of an alternative for the said drugs, if required, she said.

The Centre’s standing counsel Anurag Ahluwalia told the court that sufficient orders, which reflect the demand of Tocilizumab 400 mg, have been placed with Roche India.

However, the company has been unable to supply the same.

He said the Centre was following up with Roche India through various channels and is coordinating with them, in order to increase the quantum of imports to India.

The court was hearing a plea moved on behalf of two COVID-19 patients who were prescribed Tocilizumab by doctors but were unable to immediately arrange the medicine from anywhere.

They later received the required medication and are stable, their lawyer informed the court on Thursday.