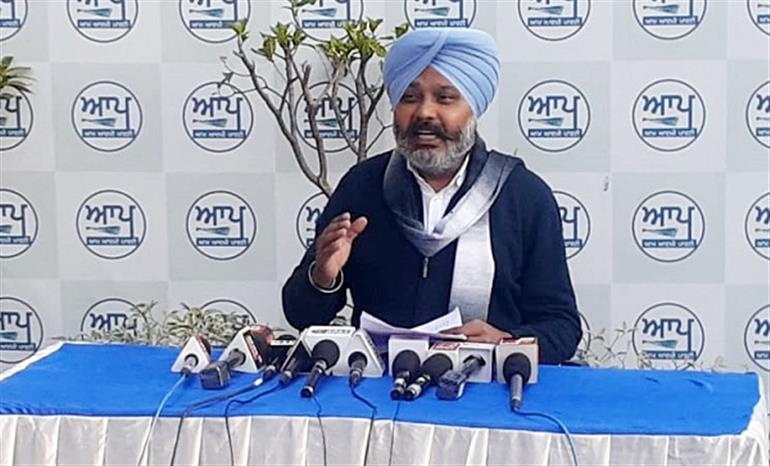 
CHANDIGARH: The Aam Aadmi Party has urged the farmers to hold a peaceful and non-violent protest to ensure that the ongoing farmer agitation does not lose its strength. In a statement issued from the party’s headquarters here on Sunday in response to the recent incident that happened with BJP MLA Arun Narang, Senior AAP leader and Leader of Opposition in the Vidhan Sabha, Harpal Singh Cheema said that in a democratic country, everyone has the right to speak. But it should be done peacefully. He said that so far non-occurrence of any untoward incident has remained the foremost strength of the ongoing farmer movement.

“This is the reason that this movement has become the largest peace movement in the world today. Farmers must maintain peace to gain victory over this agitation”, he added. Cheema said that the farmers of Punjab have been struggling day and night on the streets for many months, but some BJP leaders were using very abusive language against the farmers. He said that BJP leaders termed the farmers as terrorists, Pakistanis and traitors, due to which people are very angry and they are opposing the BJP leaders.

“Modi government, by not repealing these black agricultural laws, is desperately trying to diatribe the communal harmony of Punjab”, he asserted. Cheema said that the stubborn attitude of the Modi government is not only hindering the progress of the country, but it is also breaking the bonds of mutual brotherhood. Therefore, the Modi government should immediately repeal the black laws so that mutual harmony prevails.

While calling upon Punjab BJP, to prove their Punjabiyat, Cheema said that these BJP leaders should raise the voice of farmers in front of Prime Minister Narendra Modi and should hold talks with the central government demanding the withdrawal of these black laws. He said that the BJP leaders while understanding the growing rage among the farmers of Punjab should make it their utmost priority to pressurize the central government to withdraw these black laws. Cheema said that all political parties especially the Punjab BJP leaders while rising above politics should raise the voice of the farmers and pressurize the Central Government to repeal the black agriculture law.

On Earth Day, celebs share how damage caused to the environment can be minimised