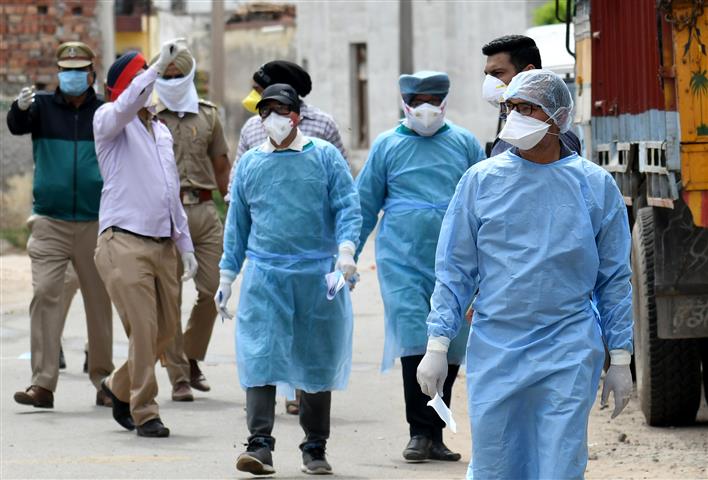 Punjab’s health department, which had ordered termination of services of around 1,000 protesting contractual employees, on Tuesday evening gave them a last chance to return to their duties in the wake of the COVID-19 pandemic.

However, the protesting employees were also asked to give an undertaking that they would not go on strike in the future.

National Health Mission Employees association state president Inderjit Rana said all the protesting employees have rejoined their duties by 5 pm on Tuesday, the time period given by the health authorities for returning to their work.

The health department on Monday had ordered termination of services of around 1,000 contractual employees working under the National Health Mission (NHM) for failing to return to their duties amid the second wave of the COVID-19 pandemic.

The health department on Tuesday said it has received reports from many districts that the protesting employees, who were on strike, wanted to rejoin their duties.

According to an order issued by the Director of the NHM on Tuesday evening, an approval is given for giving a last chance to employees to rejoin their duties after ending their strike in the light of the COVID-19 pandemic.

These employees will have to give an undertaking that they will not go on a strike or participate in it in the future, according to an order issued to civil surgeons.

The order further stated that anybody who goes on strike on May 12, his services should be terminated.

NHM Employees association state president Inderjit Rana said by imposing a condition of not going on strike in future, the government is trying to snatch employees’ right of protest against any injustice.

Around 9,000 contractual employees, including paramedical staff working under the NHM Punjab, had been on strike, seeking regularisation of their jobs and increase in salaries.

After an appeal by Punjab Health Minister Balbir Singh Sidhu, around 8,000 protesting employees had returned to their work.

In an earlier order on Monday, the director of the NHM, Punjab, had directed that services of the protesting employees be terminated with immediate effect and also ordered that voluntary staff be hired in place of them.

The action was taken under the Disaster Management Act.

Earlier, the health minister had appealed to the agitating employees to call off their strike and resume duties from Monday in the larger public interest.

Sidhu on Sunday had also warned of action against them under the Disaster Management Act if they did not pay heed to his appeal of joining their duties.

The strike by community health officers (CHO), auxiliary nurse midwives and other employees had severely affected a ‘COVID Prevention Drive’ in rural areas of the state.

The week-long absence of CHOs and other staff at health and wellness centres has led to an increase in the positivity and death rates as they assign the duties of sampling and tracing of suspected COVID-19 patients. PTI

I don’t care about what critics say: Misbah