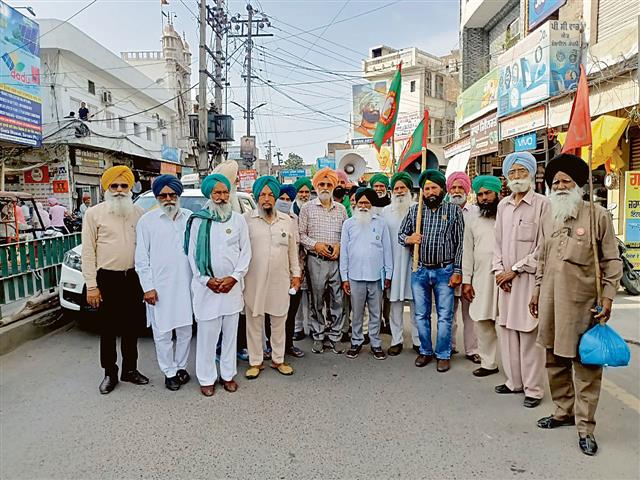 Traders today resolved to observe a strike in Fazilka on Friday to show solidarity with the protesting farmers in the wake of a call given against the three agriculture laws.

While chemists would keep their shops closed till noon, other establishments would remain shut the entire day.

In Sangrur, efforts are being made to keep markets closed during the Bharat bandh call against the farm laws on March 26. District and state-level virtual meetings are being held while teams of farmers are making announcements through public address systems in cities and villages.

“Teams of farmers have been visiting almost all markets across Punjab to convince shopkeepers and businessmen to close their places on March 26 to express solidarity with farmers. We are getting good support across the state,” said Sukhdev Singh Kokri Kalan, BKU (Ugrahan) state general secretary.

In Sangrur and Barnala, groups of farmers along with the leaders of various grain and vegetable markets are meeting arhtiyas, labour union leaders and residents to seek their support.

“The central government has stopped interacting with protesters against the farm laws. The March 26 bandh will force the government to restart the meetings with us,” said Balwant Singh Uppli, a BKU (Dakaunda) leader from Barnala.

In Fazilka, the traders also unanimously opposed the state government’s decision to levy Rs 200 per month development tax on taxpayers, including shopkeepers, in the state.

At a meeting of the Beopar Mandal, president Ashok Gulbadhar said the traders were already reeling under recession on account of the Covid pandemic, and the government decision to levy tax at this juncture was uncalled for.

Shivangi Joshi set to debut in the Punjabi music industry

Shivangi Joshi set to debut in the Punjabi music industry