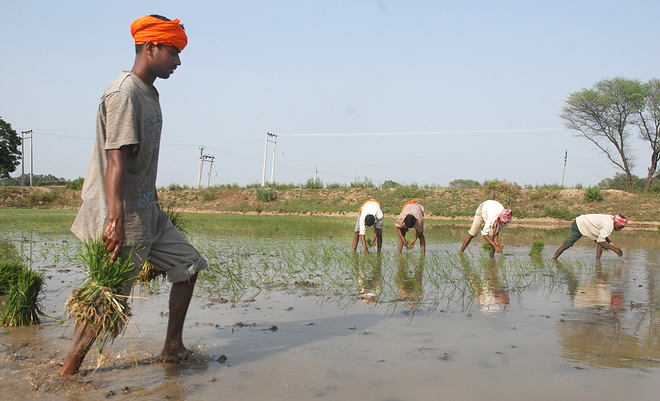 Though the Centre today issued a clarification regarding the letter written by the Ministry of Home Affairs (MHA) to the state Chief Secretary regarding the issue of bonded labourers and human trafficking allegedly afoot in border villages of Punjab, the issue has triggered a controversy among farmers and political parties who are terming it an attempt to defame the farm sector, which is already at loggerheads with the Centre.

The issue has also set the alarm bells ringing for the security agencies operating along the “zero” line in the state. The MHA wrote to the Chief Secretary following a report submitted by the BSF stating that it had already rescued 58 such migrant labourers who had been allegedly drugged and made to work for long hours against their wish.

An intelligence official said there had been shortage of labour in Punjab post implementation of MNREGA and other such schemes for the past few years, but the issue of bonded labour or human trafficking had never surfaced. “There have been instances when building contractors or other such contractors offered them drugs to increase their productivity, but these cases are generally not reported,” he said.

“During the pandemic the migrant labourers were treated so well that they refused to go back to their native place even after the government arranged buses and trains for them,” said another official.

Satnam Singh Pannu, state president, Kisan Majdoor Sangharsh Committee, said it was a conspiracy of the Centre to malign the image of farmers and dent their relations with labourers.

“Farmers consider labourers their family members and treat them accordingly,” he said, adding: “If a farmer is found ill-treating any labourer, he should be strictly punished, but the attempt in the present scenario is different.”

Darshan Singh Karma, district in-charge, Bharti Kisan Union (Ekta Dakonda), said in Punjab, the farmers paid the labourers in advance. “The labourers from Bihar and Uttar Pradesh come to Punjab willingly, not by force because they are treated well here,” he added.

Senior BSF officials said there had been instances when Indian nationals were apprehended from border areas, adding that many of them were not in healthy state of mind due to reasons beyond their comprehension.

As per information, the BSF had last year apprehended 104 Indian nationals roaming under suspicious circumstances along the India-Pakistan border in the state, while this number was 83 in 2019 and 66 in 2018.The data indicates that the number of apprehensions of had seen constant spurt in the last decade from 21 in 2013 to 104 in 2020.

“Many of these apprehended persons were involved in drug peddling. Many of them were either insane or “deaf and dumb” or feeble-minded. We generally hand them over to the police,” said an official, pleading anonymity.

In its official statement today, the MHA said the matter was erroneously reported in a section of media and the government had no intention of levelling such charges against the farmers of the state. Sources in the MHA said the media reports were misleading and distorted and the letter was written on the basis of simple observation about a socio-economic problem.

LADAKH IGNITED MINDS: A CENTRE OF EXCELLENCE AND WELLNESS (AN INDIAN ARMY INITIATIVE IN PARTNERSHIP WITH HPCL)