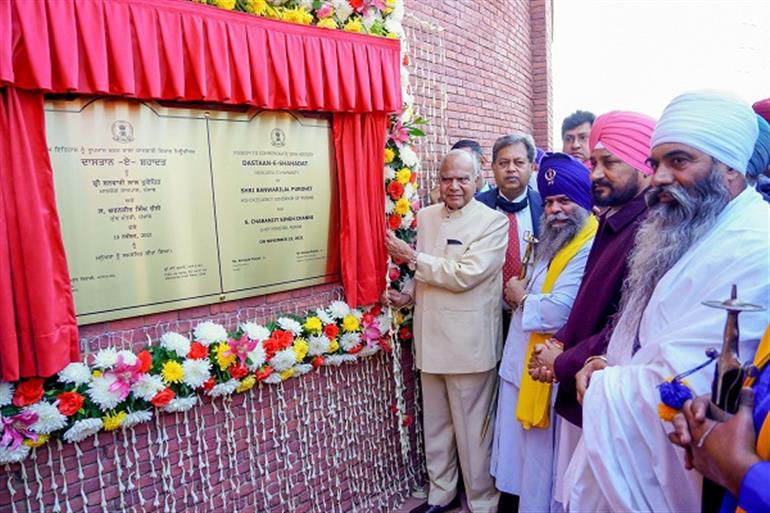 SRI CHAMKAUR SAHIB: In a bid to pay befitting tributes to the Baba Ajit Singh Ji and Baba Jujhar Singh Ji- the elder Sahibzadas of Dasmesh Pita Sri Guru Gobind Singh Ji and 40 martyrs, the Chief Minister Charanjit Singh Channi accompanied by the Punjab Governor Banwarilal Purohit on Friday dedicated the prestigious ‘Dastan-e-Shahadat’ to the mankind in the august presence of Sant Samaj and other distinguished personalities so as to connect our younger generations with the glorious past replete with countless supreme sacrifices in the annals of Sikh history.

Speaking on the occasion, CM Channi said that he was fortunate enough that dream of his life has been fulfilled with the completion of this state-of-the-art theme park project, which would go a long way in apprising the people about the saga of Kacchi Garhi visiting this place not only from within the state but also across the country as well as world. Extending his heartiest greetings to the people on Prakash Purb of Sri Guru Nanak Dev Ji, CM Channi said it was really a matter of great honour to inaugurate this prestigious project which happens to coincide with Gurpurab.

CM Channi said that the battle of Sri Chamkaur Sahib is a watershed moment in the Indian history where just 42 brave warriors including the elder Sahibzadas of Guru Gobind Singh Ji, who valiantly fought against the coalition forces of the Mughals.

Dwelling on the concept of Theme Park, the Chief Minister said the sacred soil of Sri Chamkaur Sahib is soaked with the blood of our brave warriors who made unparalleled sacrifices and displayed heroic deeds during the battle against the Mughals.

CM Channi also complimented the former Chief Minister Captain Amarinder Singh for initiating this prestigious theme project during his previous tenure, which has now been finally completed after meticulous planning and reviewing its progress from time to time by him as the Minister Incharge of Tourism & Cultural Affairs.

On the occasion, CM Channi along with the Punjab Governor visited the beautifully designed 11 galleries at the theme park, which effectively showcase Sikh history and glorious heritage from first Sikh Guru Sri Guru Nanak Dev Ji to legendary Sikh Warrior Baba Banda Singh Ji Bahadur and the presentations made there enabled the viewers to have an immersive experience thus taking them back to an era in which these events actually took place. Both the Chief Minister and Governor also witnessed audio-visual presentation on the Sikh history during their visit to the galleries.

In his address, Head of Nihang Buddha Dal Baba Balbir Singh lauded the stupendous efforts of CM Channi for ensuring holistic development of Sri Chamkaur Sahib especially accomplishing the gigantic task of theme park. He said the theme park project would enable the devotees visiting this holy town to apprise them about rich legacy of Sikh panth.

On the occasion, the Chief Minister honoured the Punjab Governor besides various prominent spiritual and religious personalities by presenting a siropa (robe of honour), shawl and framed picture of theme park.

On Gurpurab, Punjabi singers talk about their latest releases and favourite devotional songs