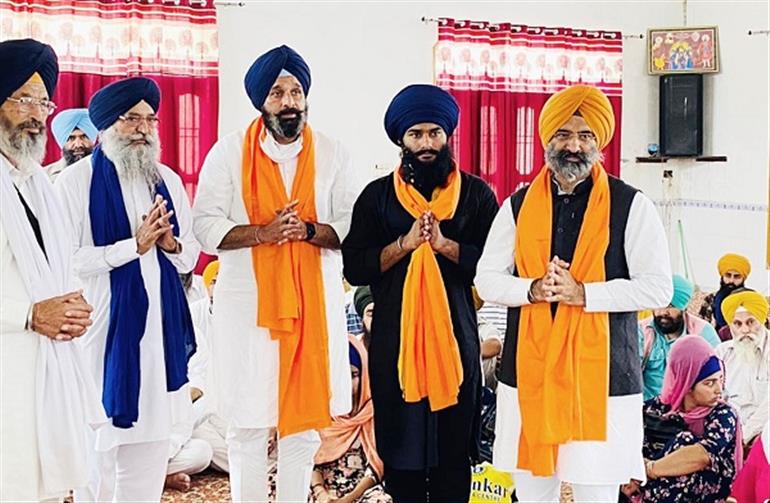 
NAWANSHAHR: The Shiromani Akali Dal (SAD) today felicitated Sikh youth Ranjit Singh who stood up to the police as well as BJP sponsored goons who tried to dismantle women tents at the Singhu border on January 29. The youth had been granted bail recently following legal assistance extended to him by the Delhi Sikh Gurdwara Management Committee (DSGMC).

Honouring the youth on behalf of the SAD, former minister Bikram Singh Majithia said Ranjit had emerged as a symbol against tyranny by protecting civil rights of women besides giving a shining example of Sikh character and values. He said in this process Ranjit had also defeated the nefarious conspiracy to vacate the area occupied by farmers protesting against the three Agricultural laws. “The brave Sikh youth had done stellar service for the cause of the Kisan Andolan as well as humanity at large”.

Mr Bikram Majithia, who joined the ‘sangat’ in honouring Ranjit Singh here as well at his native village Kazanpur, also requested the youth to continue working for the welfare of the Kisan Andolan as well as the human rights movement.

The SAD leader also expressed his gratitude to DSGMC President Manjinder Singh Sirsa and the latter’s team which he said was instrumental in securing the release of Ranjit Singh as well as 146 more youth who had been incarcerated in Tihar jail in Delhi for participating in the Kisan Andolan. While appreciating the initiative taken by DSGMC, Mr Majithia demanded that all remaining youth still incarcerated in jail be released immediately. He also demanded that the central government should apologize for the manner in which it had mistreated the Sikh youth besides calling for the immediate repeal of the three Agricultural laws.

It was announced on the occasion that the SAD and the DSGMC will provide financial aid of Rs 2.50 lakh ecah to Ranjit Singh.

DSGMC President Manjinder Singh Sirsa was also present at both places besides thousands of people who reached Balachaur to welcome Ranjit Singh and accompanied him in a convoy here.