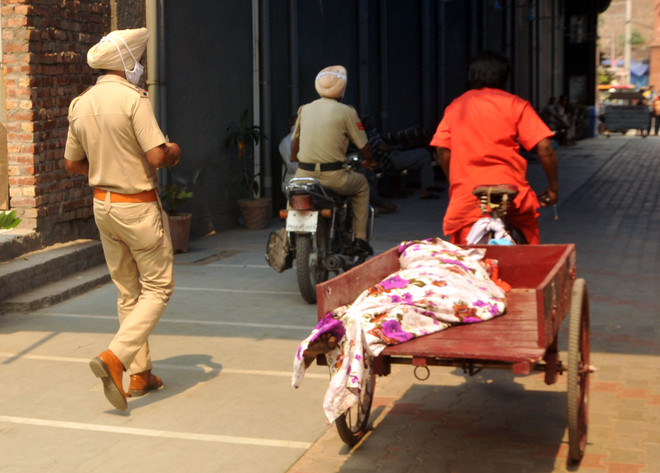 The Durgiana Mandir management committee is up in arms against the Amritsar administration after being denied ‘utilisation’ of a plot adjoining a cremation ground to store logs of wood meant for last rites.

On the other hand, the custodian of the land — Punjab Urban Development Authority (PUDA) — is reluctant to let go of the chunk of three kanal that invited good commercial value in the market.

Nonetheless, with a surge in Covid-19 casualties, crematoria in Amritsar are faced with shortage of space.

The Durgiana committee, which looks after the crematorium, is forced to build additional pyre plinths on the premises to cater to the escalating Covid deaths. In the absence of pyre plinths, kin of the deceased had started cremating bodies on passages.

Committee president Ramesh Sharma claimed PUDA officials accompanied by the police prevented them from storing wood on the land.

“We wanted to utilise the land temporarily as we ran out of space on the premises due to a surge in Covid deaths. Against the normal times, when no more than 10-15 bodies used to be cremated here, we have been receiving 45 bodies on an average daily. We are making 12 extra pads wherever we can find space for cremation. We wanted to shift our wood storage to the PUDA’s plot adjoining the ground and had fixed the girders with temporary tin sheets to save it from inclement weather and canines, but the administration objected to it and the work was stopped,” he said.

When asked about the ownership rights of the land, he said the plot was “verbally” handed over to the management by CM Capt Amarinder Singh, who announced it from public dais during his participation in the “kar sewa” of holy sarovar in 2018.

“We even offered PUDA to charge us a reasonable price for the land. We were in touch with PUDA minister Sukhbinder Singh Sarkaria, held a couple of meetings and submitted repeated memoranda, but in vain,” he said.

PUDA Chief Administrator Pallavi Chaudhary said there was no problem had the committee placed logs in the plot. However, construction could be allowed under the norms. “We had only objected to the tin sheds and boundary put up by the committee. So, the work was stopped. Had they utilised the land ‘as it is’, we had no objection,” she said.