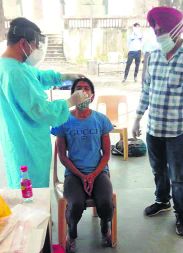 With this, the number of those who have tested positive for Covid-19 at NIS has gone up to 35.

Those who tested positive today include national boxing coaches Khimanand Belwal and Narjeet Singh, and boxers Kavinder Singh Bisht, Sachin and Ananta. Besides, some members of the support staff also tested positive for the virus, according to the Health Department.

Interestingly, the Health Department has not yet declared NIS as a containment zone, despite the high number of positive cases in the institute.

Meanwhile, a Medical officer of the Patiala Health Department said, “Despite converting hostels and training areas of the national campers into a green zone, there is a high number of positive cases. There must be some protocol violations.”

The Health Department informed that those who test positive at the NIS would be isolated at the campus itself.

Those who tested positive today were reported to be contacts of the earlier positive cases. Dr Sumeet Singh, District Epidemiologist, said, “We will declare NIS a containment zone only if the need arises. The decision will be taken after analysing the situation. The NIS authorities already have their own isolation centre.”