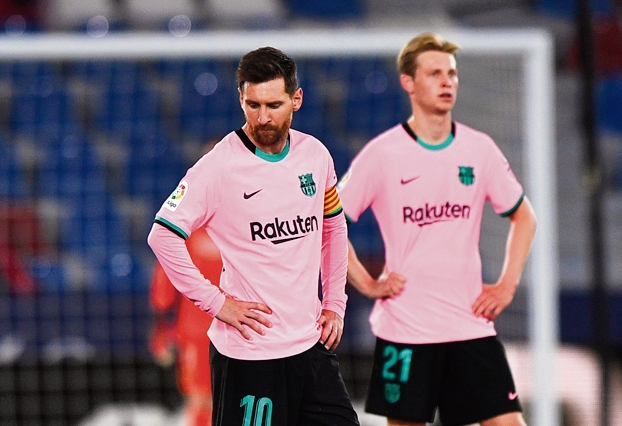 Barcelona coach Ronald Koeman stared in disbelief from the bench. Lionel Messi walked with his head down near midfield. Defender Clement Lenglet batted the ball away with his hands in frustration after being called for a foul. It was another frustrating night for Barcelona in the Spanish league.

Barcelona missed yet another chance to reach the top after blowing a two-goal lead in a 3-3 draw at Levante on Tuesday. Barcelona were up 2-0 and 3-2 but couldn’t hold on, despite knowing that a win would have put the team provisionally ahead of Atletico Madrid. There will be two rounds remaining after the midweek matches. “We have to wait and see what happens in the other games, but this was a huge step backward for us,” Koeman said. “I don’t know how to explain what happened. We played without intensity in the second half. To concede three goals in 45 minutes, it’s just too much for this team.”

Messi, in what could be his last season with Barcelona, opened the scoring in the 25th minute with his league-leading 29th goal. — AP/PTI

B-Town reacts with shock over dead bodies floating in Ganga