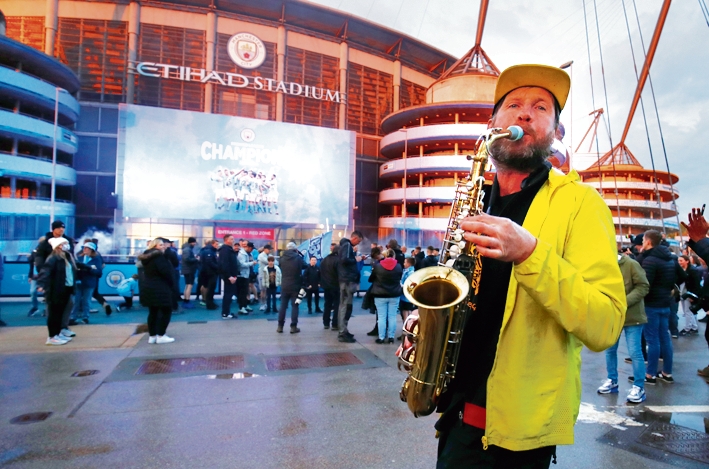 Locked out of their stadium for a year due to the pandemic, Manchester City fans couldn’t resist gathering outside, waiting for the moment they’d be crowned champions for the third time in four seasons. It was a result not inside their stadium but a few miles across Manchester at their fiercest rivals and nearest Premier League challengers that confirmed the title was reclaimed. Manchester United losing 1-2 to Leicester left City with an unassailable 10-point lead with three games remaining.

United started the century dominating English football, but now City are the force with five titles in 10 seasons and the biggest spenders on transfers and salaries.

While United fans gather outside Old Trafford in protest, at City they come to celebrate the 13 years of investment from Abu Dhabi that has transformed the fortunes of a club that was playing in the third tier until 1999 and won two English titles in the previous century, in 1937 and 1968. Within minutes of the final whistle blowing at Old Trafford, a “Champions” banner was unfurled over the entrance to the City’s Etihad Stadium. Soon, fans were setting off blue flares and parading small replica Premier League trophies. They will finally be allowed back into the stadium — up to 10,000 of them — to see City collect the real trophy after the final game of the season on May 23.

City could complete the treble by winning the Champions League final. — AP/PTI

Manchester City have conceded the fewest goals in the league — 26 — thanks to the resurgence in form of John Stones forming a centre back partnership with Ruben Dias, who joined ahead of the season for ^68 million. They have also scored the most goals — 72 — even without playing with a recognised striker. Instead 16 players have scored, more than any other team, with a dozen goals provided by midfielder Ilkay Gundogan, who has been given more freedom to attack.