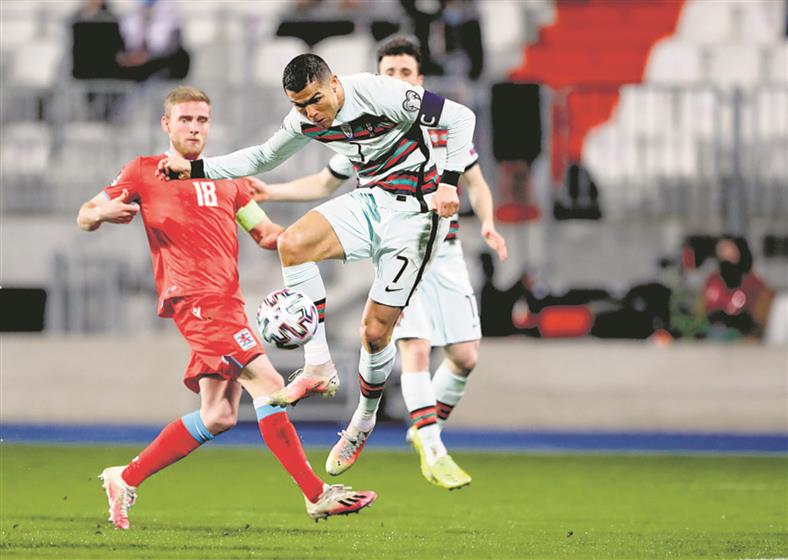 Cristiano Ronaldo scored his first goal in this World Cup qualifying campaign but then inexplicably missed a sitter as Portugal were forced to come from behind to beat Luxembourg 3-1 away last evening.

Luxembourg went into the game full of confidence after winning 1-0 at Ireland and they took a shock lead against the European champions when Portuguese-born Gerson Rodrigues, who scored against Ireland, glanced in a header on the half-hour mark.

Portugal went close to levelling on two occasions before Diogo Jota headed in their equaliser in the second minute of added time at the end of the first half. Ronaldo, who had been denied a goal in the 2-2 draw against Serbia on Saturday despite the ball clearly crossing the line, put Portugal in charge early in the second half, firing into the far bottom corner after combining with Joao Cancelo.

Ronaldo should have scored again later in the half when the ball landed at his feet following a terrible Luxembourg backpass but Portugal’s all-time top scorer shot straight at Anthony Moris.

Substitute Joao Palhinha put Fernando Santos’s side further ahead in the 80th minute by heading home a Pedro Neto corner, also scoring for the first time for his country, while the visitors’ task got easier when Luxembourg’s Maxime Chanot was sent off for a second booking in the 87th. The victory lifted Portugal to the top of Group A on seven points after three games, level with Serbia, while Luxembourg are third with three points.

Belgium crushed Belarus 8-0 to stay at the top in Group E, while the Dutch trashed Gibraltar 7-0 to go second behind Turkey in Group G.

Hans Vanaken and Leandro Trossard both scored a pair of goals as Belgium trounced Belarus with four goals in each half. “I’m delighted with what I’ve seen from every player,” Belgium coach Roberto Martinez said. “I’ve seen players taking decisive roles, I was very pleased with the performance of the young guys and how this group works together.”

The home victory left Belgium three points ahead of the Czech Republic, who lost 0-1 at Wales thanks to a late Daniel James goal after an assist by Gareth Bale. Wales and Belarus are a point behind the Czech Republic with a game in hand.

Gibraltar, ranked 195th in the world, kept the Netherlands largely at bay before the break but collapsed in the second half on the artificial turf of Victoria Stadium. The visitors added to their 1-0 halftime lead with four goals by the 64th, then got two more closer to the end.

Memphis Depay had a double for the Dutch, who trail Turkey by a point after three matches.

“The goals came later than we had hoped, but at least they came,” Depay said “We remained positive, and things came good in the end. The team spirit is great, and we have belief in ourselves.”

Turkey missed a chance to earn their third straight win after squandering a 2-0 lead in a 3-3 draw with Latvia.

Mitrovic continued his hot streak by scoring a double in Serbia’s win at Azerbaijan. He has scored five goals in the first three qualifiers. He also had a double in the opening 3-2 win against Ireland, and found the net once in the 2-2 draw against Portugal. Mitrovic opened the scoring in the 16th and netted the winner in the 81st. — Agencies

Rs. 11,830 crore released to States under the scheme “Special Assistance to States for Capital Expenditure”