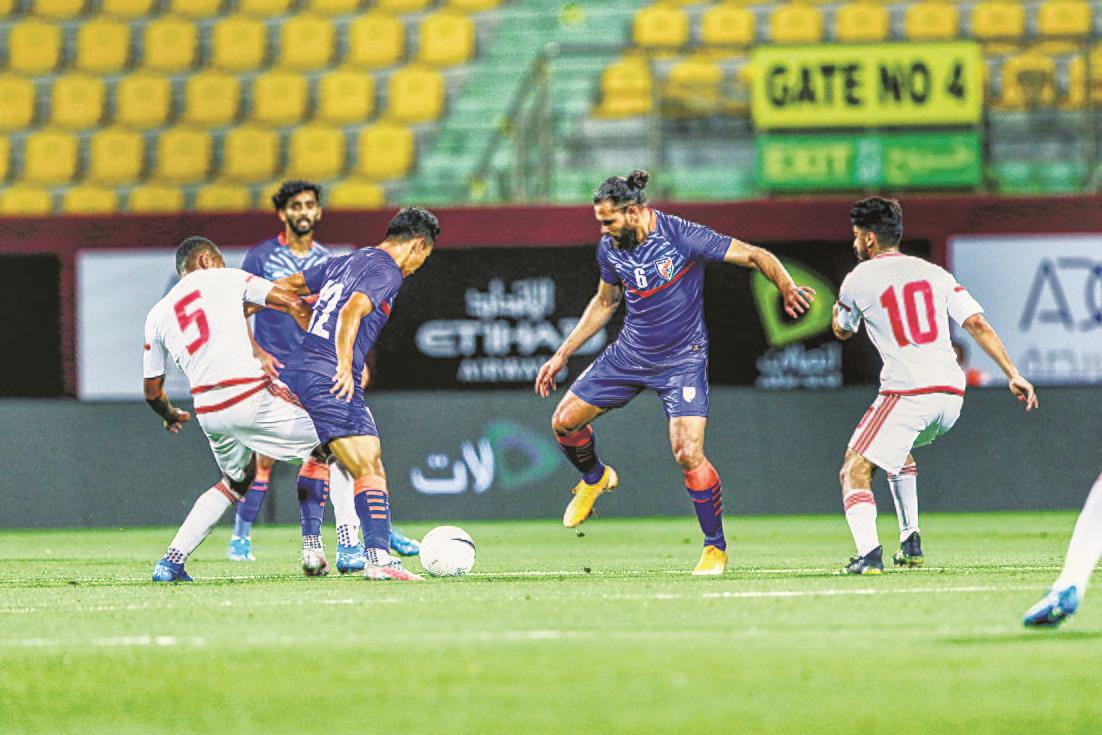 The Indian men’s football team, which only days ago had held the higher-ranked Oman 1-1 in their first international appearance in over a year, was brought back down to earth with a thud last night by the United Arab Emirates.

The Indian team suffered its heaviest defeat in 11 years, losing 0-6 to the UAE.

For the second match in a row, coach Igor Stimac fielded several new faces, making as many as eight changes to the starting XI since the first game.

The inexperienced young team, which was not really expected to shine against world No. 74 UAE, 30 places above India, and the game went on expected lines as the UAE dominated throughout.

Playing against higher-ranked opponents helps in gaining experience, but the coach would be worried over the heavy defeat, as most of the players had been part of the recent Indian Super League and are the country’s best young footballers.

Those who retained their places in the XI from the 1-1 draw against Oman were Akash Mishra, Manvir Singh, and Suresh Wangjam.

The hosts got an early lead thanks to Ali Mabkhout, who went on to score a hat-trick. India went looking for the equaliser after the goal and had a decent opportunity when debutant Liston Colaco — the 11th debutant for the Blue Tigers in these two friendlies — earned a free-kick from a dangerous position. Anirudh Thapa attempted a move from the training ground, as he played Pritam Kotal through down the right flank but the danger was averted by the UAE defence.

On the half-hour mark, Fabio De Lima cut in from the right and took a shot, that was adjudged to have been blocked by Adil Khan’s hand by the referee. Mabkhout again stepped up and slotted it home from the penalty spot.

Mabkhout completed his hat-trick on the hour mark, as he controlled the ball inside the box, and slotted it home. Four minutes later, Khalil Ibrahim’s first-time shot found the back of the Indian net, to make it four.

Raynier Fernandes and Ishan Pandita came on as substitutes in the 58th minute in place of Liston Colaco and Lalengmawia. In the 72nd minute, Hitesh Sharma replaced Suresh Wangjam in midfield. Ashique Kuruniyan was brought on for Akash Mishra with 10 minutes to go as well.

Fabio Lima added a fifth, before setting up substitute Sebastian Tagliabue towards the end, who scored his team’s sixth goal as the hosts won the match.

This was India’s biggest defeat since they went down 1-9 to Kuwait in a friendly in 2010. The result is a considerable blow as the team had shown promise by climbing up the rankings in recent years.

The frequency of huge defeats has fallen down over the years but India have continued to suffer major hiccups, like the one against UAE. — TNA, Agencies

Manpreet Singh back to lead India to Argentina

Vice President greets people on the eve of Mahavir Jayanti